My new book is officially released today! BURN ME ONCE is a Mills & Boon Dare and the hero, Ethan Ash, is one of the most famous rock stars in the world. 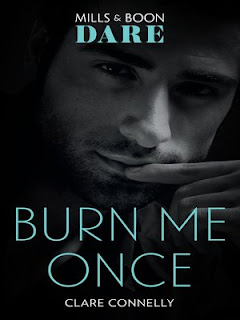 One of the great things about writing romance (and reading it, for that matter) is the sheer, unadulterated joy that comes from the escapism and fantasy. Whether it's in a bedouin tent in the middle of a sandstorm, in an ancient, mythical kingdom, or stranded on a Greek island, there's something utterly hedonistic about being able to shut out the 'real world' for a few hours.

And Ethan Ash is pure, sexy escapist fantasy! I fell completely in love with him as I wrote this book, and in order to come up with his character, I sort of cherry-picked parts of my favourite celebrities. I listened to Ed Sheeran obsessively while I wrote, and watched a fair few concerts of his on YouTube. Ethan has Patrick Swayze's arms, Colin Farrell's eyes and Mr Thornton's sex appeal...

But the core of the book, the beating, racing heart of the story, belongs to Isaac Handsome. I mean, Hanson. When I was a teenager, Isaac Hanson, or 'Ike', as he was to me, was pretty much the be-all-and-end-all of my romantic fantasies. In fact, I often credit my love for him for getting me into writing. One of my best friends and I used to write each other band-fan-fic overnight (in which we were each married to a brother, obviously...) and we'd swap these short stories every morning, devouring them hungrily before going off to write the next instalments. We were madly, completely in love and it didn't matter to me that I knew I'd never really meet Isaac (who would let the truth get in the way of true love!?).


I went from Hanson to Weezer - a bit of a strange ricochet, I'll admit, and then onto Jeff Buckley (beautiful, dear Jeff) but Ike will always hold a special place in my heart. He was my first love, my first rockstar crush. And when, only last year, I had the chance to go and see Hanson perform live, you'd better believe I was lining up with the rest of my contemporaries, screaming like a wildling, utterly under the same spell I'd lived most of my teenagers years in the thrall of.

It's only appropriate then that BURN ME ONCE is dedicated to Isaac Hanson, and to anyone who's ever lost their heart to a muso. Have you? Who was your first rockstar crush? What did you first love about them? And do they still make you weak at the knees?
Posted by Clare Connelly