Big Day (And Night) in Romance

Some of you may already know, but on Saturday the Australian Romance Readers Association (ARRA) had a BIG day out.

I had the pleasure of attending a Romantic High Tea as a special guest, along with good friends and too-fabulous authors, Kandy Shepherd and Avril Tremayne. 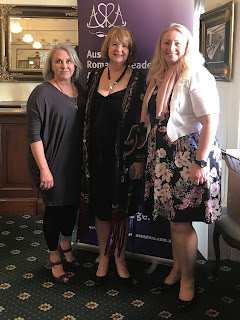 To say it was a lovely afternoon would be an understatement. The food was quite delicious at the Castlereagh Boutique Hotel, but the conversation was even better. You know when you sit down with romance readers you're going to have a fun time. You never know what will pop up in the conversation! 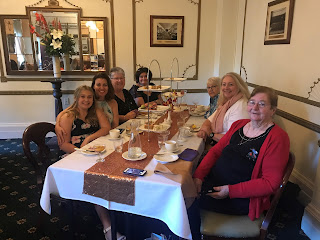 We had a few hours between the High Tea and what was coming that night - the ARR Awards! So obviously that was spent in the bar chatting with other authors who were coming in from all corners of the country for this event.

To put it into perspective, these awards are for the Favourite books from the preceding calendar year, as voted by Australian readers. Readers vote as they go, supplying their reading list to ARRA, with points, and this goes towards compiling a list of finalists for a final round vote. These titles must be published within that calendar year, and are not restricted or limited to Australian romance authors - although it is so humbling and pleasing and pride-inducing to see there ARE so many Aussie (and NZ) authors who feature in the finalists lists.

Admittedly, I've always viewed these awards as very special, as its READERS who suggest the books they've really enjoyed, and then vote on at the end. To get your book on the list in the very first place is an achievement in and of itself. And yes, when finalist authors in those categories say 'we're just happy to be nominated', we really mean it, because we know how this contest works, and it really is of huge import to us that readers cared enough about our books to include us.

I was nominated in two categories, one of which was Favourite Australian Romance Author. Well, that nomination totally blew me away, and I'm so grateful that readers put my name forward for it. This is a category where you have the mavens of Australian romance (yes, I do sound like I've got tickets on myself, don't I, but this is why I was so stunned to be included for the first time, this year). Historical romance author, Anne Gracie, won (along with her slew of other awards), and you must check out her Merridew Sisters and her Chance Sisters books to get an idea of why she keeps winning awards...

For me though, the biggest surprise was winning the Favourite Romantic Suspense Award for my novel, Heart Breaker. 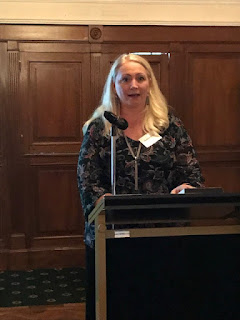 See. That expression is shock. It was such a strong category (OMG, again I sound like I love myself sick), with some really great books, and I always have a plan for this event: Tackle the person who wins the award at the end of the night. I already had my strategy mapped out for each potential winner, but yet reluctantly because they're also really beautiful, lovely ladies. Alas, I didn't actually have a strategy if I WON, and I've discovered I suck at thank you speeches on the fly... Anyway, the other authors in this category are very, very talented, so you should definitely go check out their books. Pay close attention to Amanda Knight and her debut novel, Situation Critical. Amanda won Favourite New Author, and was nominated in FOUR categories, so she is an author star on the rise.


It was a fantastic evening, and I wanted to send a shoutout to the ARRA organisers. This event is at least a year long in the making, with collecting and collating scores and titles, and then opening up for votes, tallying, etc, and the organising of the night itself. It truly is humbling to see all that hard work in the name of the romance genre. I also wanted to say thank you so much to the readers for buying our books, reading them, commenting on them, voting for them, and also for turning up on the night, we LOVE meeting you all and talking books.

Thank you also to the sponsors - Booktopia, Harlequin Australia, Hachette Australia and Allen & Unwin - it is such a special night. I treasure my new shelf buddy. 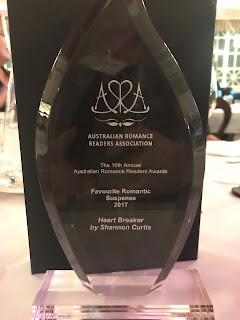