Spreading the Love of Reading

The past week has involved a couple of inspiring events for me that have focused on promoting a love of reading in disadvantaged communities. 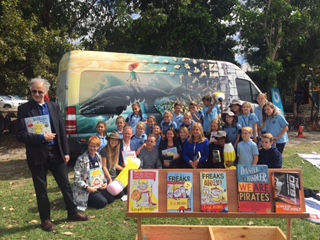 Last week, Byron Writers Festival (of which I’m the Chair) launched our StoryBoard Bus, a travelling creative writing program bringing authors and illustrators into schools across the Northern Rivers region of NSW. We are particularly focusing on under-resourced and disadvantaged school groups. The bus was unveiled by special guest, Leigh Hobbs the Australia's 2017 Children's Laureate. StoryBoard will run more than 100 free school visits and master classes each year for the next three years, with authors including Tristan Bancks, Samantha Turnbull, Lucas Proudfoot, Zanni Louise,  Sarah Armstrong, Oliver Phommavanh, Jesse Blackadder and other authors still to be announced. The bus and the program are the result of a huge effort by the Festival team and members of the Board and from support from Create NSW and the Australian government's Stronger Communities program for funding the bus and to the Catalyst program, which supports the ongoing delivery of StoryBoard. A really incredible achievement and seeing it unveiled made all the volunteer hours worthwhile.

Room to Read
I’ve just arrived back from Victoria where my son goes to school. His boarding house organised a charity night where they raised over $10,000 for Room to Read which is an organisation which transforms the lives of millions of children in developing countries by focusing on literacy and gender equality in education.  Room to Read invests in nearly one million children each year so the fundraising efforts of all the boys in the house will help a little bit to contributing to that goal.

So, it’s been quite an inspiring week of being involved in wonderful projects that are focusing on a love of reading. Have you been involved in any inspiring projects lately, I’d love to hear about it.
Posted by Jennifer St George