Welcome to another LoveCats DownUnder Sunday Smooch!
Today we have a smooch from but first ...... the winner of last week's Sunday Smooch Giveaway is Laney4

Can you please contact Andi Bolter at andrea@andreabolter.com to receive your prize.
And now for today's Sunday Smooch from Bad Bachelor by Stefanie London. 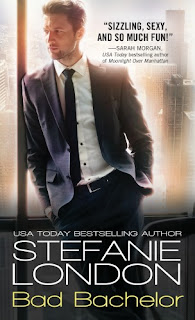 Everybody’s talking about the hot new app reviewing New York’s most eligible bachelors. But why focus on prince charming when you can read the latest dirt on the lowest-ranked “Bad Bachelors”—NYC’s most notorious bad boys.
If one more person mentions Bad Bachelors to Reed McMahon, someone’s gonna get hurt. A PR whiz, Reed is known as an ‘image fixer’ but his womanizing ways have caught up with him. What he needs is a PR miracle of his own.
When Reed strolls into Darcy Greer’s workplace offering to help save the struggling library, she isn’t buying it. The prickly Brooklynite knows Reed is exactly the kind of guy she should avoid. But the library does need his help. As she reluctantly works with Reed, she realizes there’s more to a man than his reputation. Maybe, just maybe, Bad Bachelor #1 is THE one for her.

Set up... Reed has followed Darcy into a bar, where she's hunting down one of the men from the Bad Bachelors app. Reed isn't impressed by her choice.
There was something about Darcy that caused Reed’s competitive streak to flare up. It prickled under his skin, turning a fleeting thought into a persistent drone. It was the exact reason he’d come into this bar when he’d spotted Darcy by chance. She’d walked in with two friends, laughing and smiling in a way she didn’t around him. Before he’d even given it a second thought, he’d headed into the bar after her, desperate to see more of Darcy in her natural state.
Then he’d seen Five-Star Darren too. He didn’t know the guy personally, but he’d trawled through Bad Bachelors looking at the guys they’d deemed better than him.

So that’s why she was here? To chase some guy who’d likely leave her wanting and unfulfilled?
It was obvious she was attracted to Reed—and not because he believed the drivel he spouted about women wanting him, but because he could see it plain as day.

Yet she fought it at every turn.

Her chest rose and fell in uneven bursts, as though she had to remind herself to continue breathing. Then there was the fidgeting, the hair flipping, and the tightening of that perfect, pouty mouth.

“I bet if I kissed you, that sweet, little mouth would part like the Red Sea.” Satisfaction coursed through him when her nostrils flared. He dipped his head lower, so he could whisper right into her ear. “And I bet your hands would curl into my shirt, so you could hang on for dear life.”

Her breath stuttered in and out. “You don’t affect me, Reed.”

Defiance rolled off her in waves.

“Kiss me then,” she taunted. “You’ll be disappointed with my reaction.”

“I doubt that very much.”

Her eyes widened when she realized he fully intended to prove her wrong. Shifting, he moved his
body over hers, trapping her by planting his palms against the wall, one on either side of her. Caging her in. Sealing off the exits.

“Reed…” Her breath came in ragged bursts, but she didn’t tell him to stop. Instead, she flattened her hands behind her and blinked her long, sooty lashes up at him.

“Darcy.” His lips hovered over hers, their breath mingling in that delicious pre-kiss limbo.

Just as he predicted, her lips parted in that final second, inviting him in. He pressed against her, locking her down with his hips and his mouth. She didn’t kiss like a woman who wasn’t interested. Hell no.

She kissed like a woman starved. Any pretense of tenderness was crushed when her tongue slid along his, her piercing bumping him in a way that was foreign and exciting.

He stifled a moan—the combination of metal with the sweet taste of bourbon winding through his system like a drug. 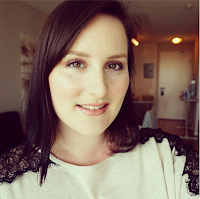 For a chance to win an ebook copy of Bad Bachelor, please share what your "ideal date" would involve in the comments below!
Come back next Sunday, when the winner of today's giveaway will be announced and a new smooch will be posted!
Posted by Unknown