Today we have a smooch from Michelle Douglas but first the winner of last week's Sunday Smooch Giveaway is...Latesha Ballard.

Congratulations Latesha! Can you please contact Annie: annie (at) annie-west (dot) come to receive your copy of Contracted for the Petrakis Heir


And now for today's Sunday Smooch from A Baby in His In-Tray. 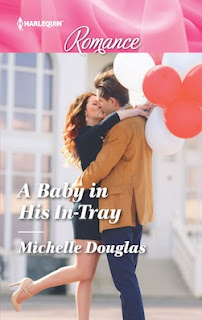 To go into the draw to win a signed copy of A Baby in His In-Tray just leave a comment:  I can't imagine anything more stress-inducing than pretending to be something (or someone!) I'm not. Have you ever managed to pull off a minor (or major) deception or bluffed your way out of a situation pretending to be someone you weren't?

Email ThisBlogThis!Share to TwitterShare to FacebookShare to Pinterest
Labels: a baby in his in-tray, michelle douglas, Sunday smooch, sweet romance