And now for today's Sunday Smooch from Her Las Vegas Wedding. 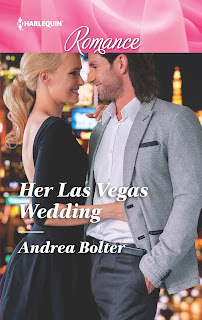 From a convenient fiancé …To an inconvenient attraction!

When hotel heiress Audrey Girard’s safe, convenient wedding to a business partner is called off, she’d left to contend with her ex-fiancé’s brother – wild, brooding chef Shane Murphy. And there’s certainly nothing safe about Audrey’s attraction to Shane – every day they work together is even more dangerously tempting! Could there be a Las Vegas wedding in the cards after all?


He came around to her side of the car and helped her out. There were no other cars anywhere. They were miles away from town under the sunset and the hush of nightfall.
With no warning whatsoever, Shane rested one hand on each of Audrey’s shoulders. He leaned down and kissed her on the lips. His mouth pressed against hers in a closed-mouth but adamant kiss.
Her neck flushed instantly. Having him close to her was a little bit familiar now after their bodies had writhed together with their sexy dancing at Big Top. But he hadn’t kissed her that night, and this new intimacy was an alarm to her system.
A shock that she missed with all of her might when he took his lips away. Her lungs ceased functioning. They were furious at him for having taken his lips from her. All she could seem to want was for him to kiss her again. Oxygen in, carbon dioxide out, she reminded herself of the basic breathing process.
“Come here,” he said, filling her with the hope that his mouth would graze hers again. Her eyelids fluttered uncontrollably.
But no. He lifted her up and sat her on the hood of his jeep. Then hoisted himself onto it as well. He maneuvered backward so that he could lean back against the glass of the windshield with his legs outstretched on the hood. Then he helped shimmy Audrey backwards so that she could do the same.
She somehow didn’t care that she was wearing a business dress and heels. His spontaneity was liberating.
Now they were able to continue to watch nature’s spectacle with a warm breeze gliding across their faces.
Audrey had to settle herself down. He’d obviously kissed her by mistake. Out of some kind of urge that probably had nothing to do with her. She shouldn’t read anything into it.
Maybe sensing Audrey’s discomfort, Shane thankfully broke the quiet. “What was Josefina saying to you about tragedies?”
Audrey creased her brow, not sure what or how much was appropriate to tell Shane. “I told her that my mother had died three years ago. Josefina thought that loss was a similarity to share.”
Shane chuckled wistfully, “Does it work that way?”
Audrey shook her head. “I was wondering the same thing.”
They took in the majesty of the sunset again. The sides of their bodies pressed into each other.
Then Shane turned himself until he was facing her.
“So soft,” he murmured as he dotted kisses all over her face.
His beard stubble felt exactly as she imagined it would, rasping across her cheeks with a welcome harshness. Filling her with the need for contact that was wholly male, wholly biological. Something that she’d dared not think of in years.
When his mouth inched down her neck, her head fell backward.
With a flattened palm, he caressed the length of her throat from behind her ear to the swerve of her shoulder. His lips moved under the collar of her dress. In a beat, her back arched to meet him.
Flowering with anticipation, her parted lips waited for him to return upward. As if he knew she couldn’t delay a moment longer, his open mouth rejoined hers. A quick succession of kisses was followed by a longer one that melded them into each other.
Her arms reached around his neck. His mouth possessed hers, communicating what she had to hear. She met his every sensation, the kisses swirling deeper, further, quaking both of them at their epicenters.
“What are we doing?” she muttered, with no idea of the answer to the question.
He whispered, “Sharing loss.” 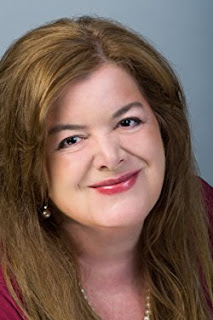 To go into the draw to win a copy of Her Las Vegas Wedding just leave a comment. Question: I'm drawn to stories about powerful yet damaged men. I'm fascinated by the man who rises to success even though demons haunt him in the quiet moments. Do you like that kind of hero in a story? Why?