Today we have a smooch from Michelle Douglas but first the winner of last week's Sunday Smooch Giveaway is Natasha Persaud.

Congratulations Natasha! Can you please contact Annie West --  annie (at) annie-west(dot) com -- to receive your copy of Seducing His Enemy's daughter 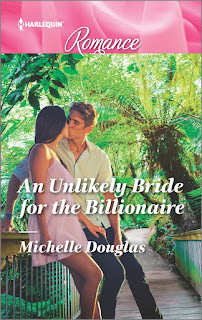 A most unlikely match!

Mia wants to keep her head down - not get distracted by handsome billionaire Dylan Fairweather! Asked to plan his sister's wedding, she can't say no to his other outrageous proposition: pose as Dylan's girlfriend so he can assess his future brother-in-law's intentions!

Shy Mia doubts anyone would believe he's dating her…especially if they discovered the secret past she's worked so hard to leave behind. But as she grows closer to Dylan, Mia might just find she's more than worthy of this prince among men…


Scene set-up: Mia has just had dinner at the Fairweather mansion. An incident  upset her and Dylan has comforted her. They are sitting outside, beneath the stars, and Dylan has Mia firmly ensconced in his lap. ;-)


‘If you really don’t want me to kiss you, I won’t.’ He trailed his fingers down her throat and along her collarbone. ‘I love your dress.’

The change of topic should have thrown her, but she grasped it like a lifeline. ‘It’s new. I bought it especially.’

Her eyes met his.

His fingers continued to trail delicious paths of sensation across her skin. ‘Are you sure your stance on romance hasn’t changed?’

She couldn’t look away. ‘Positive.’

‘I still want to kiss you.’

Her heart beat so loud she thought he must hear it.

Her pulse thumped. ‘I’ll own to some curiosity,’ she managed.

She met his gaze and nodded. ‘Yes.’

Mia realised her mistake the moment Dylan’s mouth claimed hers.

She’d thought his first touch would be gentle, but it wasn’t. It was sure and firm and a complete assault on her senses.

Dylan wanted to overwhelm her with sensation—perhaps in punishment for her ‘my stance on romance hasn’t changed’ comment. He wanted to thank her for sticking up for him at the dinner table… And somehow both of those impulses cancelled out the underlying threat in the other and dragged Mia under as if she’d been picked up by a giant wave.

She wound her arms around his neck and held on, waiting for the crash to come as the wave barrelled her along… But it didn’t slam her down as she’d feared. Dylan’s arms cradled her, holding her safe, and in the end all Mia could do was sink into them.

Dylan deepened the kiss, kissing her so thoroughly and with such intensity that his name was wrenched from her throat.

He lifted his head for a moment, his eyes glittering, and she suddenly realised that the flirtatious charmer had been stripped away to reveal the warrior beneath. And every potent ruthless sinew of his being was focussed wholly on her.

It should have made her afraid.

But she wasn’t afraid of him. All she had to do was tell him to stop. And she knew that he would.

One corner of his mouth lifted, as if he’d read that thought in her face. ‘You think I’m going to give you a chance to think, Mia?’

Her heart thumped. ‘Dylan, sex won’t make a scrap of difference. I—’

The force of his kiss pushed her head back. One of his hands traced the length of her—slowly, lazily—and Mia couldn’t help but kiss him back with just as much force, hunger ravaging her body.

She wanted this man.

If she couldn’t have him she thought she might die.

Dylan is the owner-manager of a very successful events management company. He throws the best parties. To go into the draw to win a signed copy of An Unlikely Bride for the Billionaire, tell me the most memorable party or event you've ever been to?


Come back next Sunday, when the winner of today's giveaway will be announced and a smooch from Katrina Cudmore will be posted!