Today I'm utterly delighted to introduce the second in our special feature of Sunday Smooches showcasing the LoveCat finalists in this year's Romance Writers of Australia RuBY Awards. 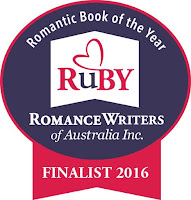 The RuBY is Australia's premier award celebrating the best the romance genre has to offer. It's open to all Australian and New Zealand authors and the finalists are chosen by reader judges. We're so excited that Annie West's phenomenal talent has been recognised once again.

Once again, I hear you ask? Why yes. :-) Last year, amid much cheering and stomping of feet, Annie's Damaso Claims His Heir took out the RuBY in the Short Sexy Category. 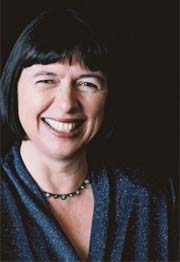 Annie's books are reader favourites. Listen to what readers have been saying about Seducing His Enemy's Daughter:

"I loved the drama, the characters, the sizzling romance and in short everything about the story" Ipshita, Romance Junkies

"Loved this book! I didn't put it down from start to finish." Lynn B, Amazon

"I loved the ending so much. This is totally a must read for any romance junkie." Bootlover, Amazon

Happy sighs! Doesn't that make you want to rush straight out and read it?
Psst, buy links are below. ;-) 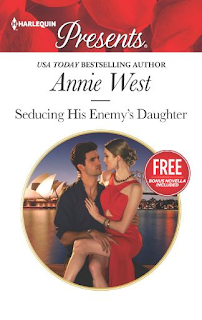 Donato Salazar can’t forget his tragic past and he has no intention of forgiving the man responsible. Jilting his enemy’s daughter will be the icing on the cake of his revenge, and beautiful Ella Sanderson is certainly sweet enough.

Except Ella isn’t the vacuous socialite he expected and she refuses to marry him! Her rebelliousness only makes Donato want her more, so he’ll have to persuade her…touch by breathtaking touch.

But soon Donato finds himself enthralled by their magnetic connection. As their fake wedding day approaches, one question weighs heavily on Donato’s mind: to love, honor…and betray?


Setup: Donato has come to Sydney with the aim of destroying Ella’s father. When her father suggests Donato marry one of his daughters to cement what he believes to be a once in a lifetime chance to get his hands on Donato’s money, Donato plays along. But his plans take a hit when he meets Ella, who’s not the vacuous socialite he expected. From the instant they meet the attraction between them is explosive. Ella knows Donato is playing some devious game with her father and she refuses to be a pawn. She confronts him but he turns the table by talking, not about deals, but about the powerful current of desire between them.

‘No one is forcing you into anything. Believe me, I would never force a woman into my bed.’
Ella stared into his face, noting how those dark features set in stern lines of rigid control. There was hauteur in the flash of his eyes and pride in the set of his shoulders.
She believed him. The realisation rocked her.
‘What we’re discussing now is sex.’ His voice turned deep and liquid on the word, matching the slow-turning need inside Ella. ‘You and me. Uncomplicated, satisfying, scorching.’
‘Scorching?’ Ella didn’t know how the word escaped. It wasn’t what she’d meant to say. Clearly the look in his eyes had incinerated part of her brain. ‘You assume a lot.’
He shook his head. ‘I assume nothing. I know, Ella. Can’t you feel it?’ Again he reached for her, but this time he only clasped her hand lightly. Fire sparked from the point of contact and she had to work to suppress shivers of delight.
How had she come to this? She’d raced halfway across Sydney to confront Donato, filled with righteous indignation and—
But there’d been more, hadn’t there? No matter what she pretended, it hadn’t just been indignation. She’d been almost relieved for the excuse to see him again, despite her fine talk about never meeting again. She was angry, for sure. But she was also…enthralled.
She swallowed, her throat scratchy as she confronted the truth. She wanted Donato Salazar as she’d never wanted any man. Her skin felt too tight, her chest too full.
Donato stroked one finger along her palm and she gasped as pleasure rocketed through her.
‘Tell me you feel it,’ he purred.
Ella bit back a groan of despair. She was out of her depth. She’d never been good at flirtation. Suddenly she didn’t care about pride or keeping up an image. This was about survival – and she felt like she was going under for the third time.
‘What do you want from me, Donato?’ I don’t play these games.’
‘I don’t play games either. Not about this.’ His face was grim, the hint of teasing erased from features that looked pared back and intense. He swallowed, his Adam’s apple bobbing hard and something within her eased at that visible sign he wasn’t totally in control.
Suddenly he stepped back, releasing her hand, and cool air wafted between them.
‘What happens next is up to you.’ His heavy-lidded look was a challenge and an invitation.

Donato looked down into stunning blue-grey eyes, grown huge and wary. He felt the doubt radiating from Ella, just as he felt the heat of sexual arousal.
His body was taut, humming with need, and he couldn’t quite believe the effort it took not to step closer and persuade her into surrender as he knew he could. The attraction dragging at his belly, arcing between them, was powerful.
But there’d been something about the way she mentioned her sister, on top of her talk of being forced, that held him back. He’d seen the quickly-veiled hint of fragility in Ella’s expression.
He didn’t have her measure yet but one thing he knew. He needed Ella to come to him.
The moment of silence grew to two pulse beats, three, four, more. His nerves and his patience stretched. He forced himself to stand unmoving, as if he wasn’t strung out.
Then with what sounded like a muffled oath, Ella launched herself forward. She cannoned into him, soft and curvaceous, warm and delectably feminine. Automatically he grabbed her to him, catching her in a tight hold. Her arms looped up over his shoulders, her hands burrowing up through his hair, pulling his head down.
He had a moment to register that fresh-as-a-garden-after-rain scent then their mouths collided and his brain shorted.
So good. She felt even better than he’d expected. And she tasted—
Donato plunged deep into her mouth, forcing her head back, swallowing her sigh of response. Ribbons of heat unfurled through him as he savoured Ella, so delicious, so right. Her soft lips, her demanding tongue, the way she melted into him even as she challenged him to give more. He angled his head, hauling her even closer, lost in a kiss that was so much more than he’d expected, despite his anticipation.
He couldn’t get enough. Her lush body cushioning his instant erection. Her hot, eager mouth that tasted of peach nectar. Her thigh, sliding restlessly against his leg as their tongues tangled and lips fused.
Donato grabbed her thigh and hauled it up, swallowing her gasp of shocked approval. There. He wanted her there. He bent his knees, angling his hips so he rubbed against the softest, most secret part of her.
To his delight Ella’s hands tightened against his scalp, not pushing him away but clutching as if she couldn’t get close enough.
Dimly he wondered what had happened to slow seduction. To years of expertise at pleasing a woman. To caution and taking things one step at a time.
With Ella there were no steps. There was just a headlong plunge into riotous need.

Have you ever won something? Have you ever entered a contest, bought a raffle ticket or played roulette and won? Leave a comment and one name will be randomly drawn to win a copy of SEDUCING HIS ENEMY'S DAUGHTER. 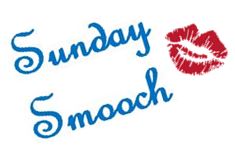 And speaking of winners...last week's Sunday Smooch winner is riet_media. Please contact Amy via amy (at) amyandrews (dot) com (dot) au to claim your copy of Playing By Her Rules.
Come back next Sunday, when the winner of today's giveaway will be announced and a smooch from  Michelle Douglas's An Unlikely Bride for the Billionaire will be featured.