Today we have a smooch from Jennifer St George but first


... the winner of last week's Sunday Smooch Giveaway is Debbie


And now for today's Sunday Smooch from The Billionaire's Passionate Revenge by Jennifer St George. 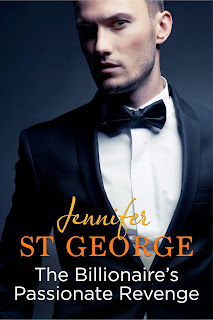 Heiress Lady Zara Ravensdale and Xavier Hunt, the gardener's son, were once inseparable. But before their romance had a chance to bloom, it was crushed by scandal and betrayal.

Xavier is now an international celebrity and sexier than sin while Zara is deep in debt, running Ravensdale Manor as an upmarket hotel to make ends meet. Unable to forget the past, Xavier returns to the manor, determined to exact his revenge on the Ravensdale family – once and for all.

Together again, passions reignite and the old chemistry becomes impossible to ignore. But Xavier and Zara are both keeping secrets and neither can forget their troubled history. Will they be able to uncover the truth of that night or will Xavier's need for revenge tear them apart forever?


Zara fell ill just days before she was to host a charity Fair at her ancestral family home, Ravensdale Manor. Xavier stepped in to complete the final preparations so the event didn't fail. After all, the charity was for a very worthy cause. But was his hard work only for the charity or was there something else at play?

‘I think you’ll find that the stables are now satisfactory for the charity auction,’ Xavier said.

He hauled open the heavy wooden doors, his muscles tensing and bunching under his T-shirt. She held herself tight, to stop herself reaching out and running her hands over those gorgeous shoulders.

‘Your new exhibition space,’ he announced with a flourish.

She stepped inside. Her eyes took a moment to adjust to the dim light. She’d explained to the fair organisers that the space would still be rather rustic but clean.

Slowly, the transformation of the space became clear. She gasped, staring, eyes wide. Xavier turned on the lights and the reality of what he’d achieved in three days was revealed. An electric tingle ran down her arms and her hands flew to her chest.

Whitewashed walls, a freshly laid wooden floor, pearly-white down lights that directed the light into all the right spaces. The beautiful old beams had been sanded back, taking off hundreds of years of muck, and had been finished with a beautiful golden stain. The natural beauty of the ancient wood shone, highlighted against the simple white walls. The old grimy stables were now better appointed than the local art gallery.

He took her hand and walked her to the middle of the room.

‘Well, I was going to do what you’d planned. Clean it out and whitewash the walls, but it had so much potential. I couldn’t stop at a little paint. So I drew up some plans and called in some help.

She turned slowly around and around, drinking in the changes. Xavier had perfectly blended the old-world charm of the building with modern features. It must have cost a fortune.

The heavy pressure of panic settled on her chest. ‘Xavier, I can’t afford this.’

He held both her hands. ‘Don’t worry. I’ve got it covered.’

Pure love flooded her heart. She threw her arms about his neck and hugged him tight. How could she ever have doubted this man?

This was her Xavier. The man she’d loved. Surely this must clear the slate of his teenage misdemeanours. He was honourable. He was ethical. He was trustworthy.

His arms circled her waist, bringing her body flush with his. So close. So close she could feel the beat of his heart. Her breath stalled.

He drew her closer. This was no friendly hug. The light caress of his breath stroked her neck. He brushed his cheek against the sensitive skin beneath her ear, then his lips followed. Fire blazed through her bloodstream. She drew in a stuttering breath.

‘Xavier,’ she whispered, her voice already altered with desire.

His demand drove beads of desire deep, down low. Hell, she wanted to scream his name.

‘Xavier,’ she breathed, her lips close to his ear.

His body shuddered and he trailed kisses down her collarbone. She ran her fingers through his hair.

He straightened. The rings around his irises looked like molten gold, his eyes smouldering with want.

‘Now say you want me,’ he commanded.

His words sent a shiver of raw desire straight to her core. Zara placed her palms on his cheeks and drew his face in close to hers. The scent of cloves and raw masculinity assailed her nostrils. She dragged in a breath, dizzy with need. Her body demanded to be touched.

The Billionaire's Passionate Revenge is out on September 15th but is available for pre-order now at Amazon, iTunes, Kobo and other e-tailers so I do hope you'll drop by your local e-book store and pick one up.

In the meantime you have a chance to win a free e-copy if you leave a comment on this question - have you ever been part of organising a charity event - big or small? Did it all run smoothly?


Come back next Sunday, when the winner of today's giveaway will be announced and a smooch from the fabulous Sue McKay will be posted!