Today we have a smooch from  Amy Andrews but we have some housekeeping first!

And now for today's Sunday Smooch from The Colonel's Daughter....... 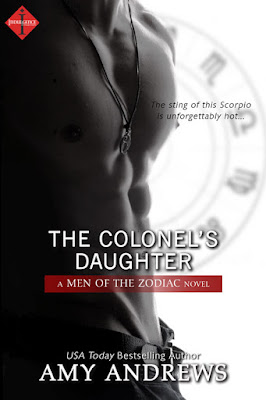 The sting of this Scorpio is unforgettably hot...

Ivy Danforth is out from under her Colonel father's overprotective control, and she's making it count. Big time. She's taken the summer off to travel through Australia with her bestie and experiencing all that life has to offer-when you're not under constant military surveillance. She wants to end her summer with some sexy fun, and she has just the hottie in mind.

Seth Rodrigo is ex-Special Forces working undercover and keeping an eye on Ivy as a special favor to her father. All he has to do is not give the game away and reveal who he really is. And especially not give into the hunger that's burning through his careful control...

Then they're forced into protective custody. Alone. Together. For four days. And this time, the Colonel's daughter isn't taking no for an answer...


Ivy and Seth (who she thinks is Dean) have been holed up on a hotel room for a few days while the police hunt a drug dealer who has put out a hit on them. Ivy is trying her damndest to seduce the guy but he's taking honour to a whole new level. But then the police ring to say they've caught the guy and Ivy's not leaving that hotel room without her V-card well and truly cashed in.

He propped his head on his hand and looked down at her before stroking his index finger down her nose and over her lips and chin to her throat. When it reached the hollow it continued lower passing through the valley of her breasts, dissected her stomach, and swirled around her belly button.

Ivy’s pulse spiked as it travelled lower and she made a little noise at the back of her throat as it slowed right down, but his gaze held hers captive and she couldn’t look away.

She sucked in a breath as his finger furrowed through the hair at the apex of her thighs and came to a stop tantalisingly close to ground zero.

“Has a guy ever made you come?”

Her eyes widened and her vocal chords almost went into paralysis at the frank question. It scandalised and titillated. So this was how the big boys played.  Her breath scorched her lungs, hot enough to ignite. “No.”

“Do you give yourself orgasms?” he asked, his eyes never leaving hers.

“Sometimes.” Bloody hell. She couldn’t believe she’d just admitted that. But his question emboldened her. “Do you?”

She got wetter just thinking about Dean touching himself. Would he think of her, of this, when he did it next? She hoped so. She knew for damn sure she’d be thinking about it—about him—next time she did.

His hand drifted back up again and Ivy couldn’t work out if she was bereft or relieved. He’d been close, so close. But she was happy to let him take the lead. His fingers swirled around her nipples from one to the other in a figure eight and she moaned and arched her back.

“I like watching your eyes when you’re turned on,” he said, holding her gaze. “They go really green.”

Ivy was incapable of saying anything as his fingers kept up the maddening rhythm, circling close, so close to her nipples before skating away again. “And I’m obsessed with your mouth,” he muttered, his fingers trekking up her throat to her lips, his thumb rubbing back and forth along the bottom one, her belly clenching tight. “I love your mouth.”

Ivy drew in a ragged breath at the surprising choice of words, but didn’t get a chance to respond or even process it properly before his mouth was proving just how much he was obsessed with hers.

He nuzzled it lightly, dancing a trail of wispy kisses across it, adding in tiny licks of his tongue
along her bottom lip, mimicking the path of his thumb earlier. They drove her crazy, stoking not satisfying. She chased each one, frustrated at his gentleness, trying to get him to linger, to open, to give her more.

“Dean,” she whispered against his mouth. “Please.”

His deep groan rumbling around her told her she’d discovered the magic word as his control seemed to snap, a hand planting on her opposite shoulder as his mouth opened hard and hungry over hers.

Ivy was ready, every cell rejoicing at the relentless pressure, her hand furrowing into his hair as she sought to pull his head closer, to invite his tongue in deeper, to grant him all the access he demanded, to stoke the deep well of need inside her into an inferno.

He could have all of her.

She was always going to want this. Want him.

His mouth left hers and Ivy whimpered in protest. “Shh, it’s okay,” he murmured, his lips brushing against hers with every word, “I’ll be back.”


Are you a fan of bodyguards romances? Do you have a fav book/TV/film with this trope? I'll giveaway a digital copy (will gift from Amazon) of The Colonel's Daughter to one lucky person who leaves a comment. 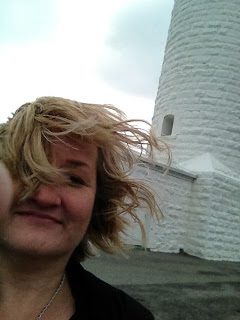