Can you please contact louisageorgeauthor (at) gmail (dot) com to receive your copy of 200 Harley Street: The Shameless Maverick 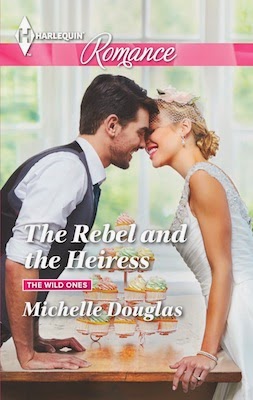 From rebel--to knight in shining armour…?

Losing her family fortune, it's time for once-privileged Nell Smythe-Whittaker to make it on her own…with a little help from delicious bad boy Rick Bradford!

Rick hasn't' seen Nell since childhood, but with a family mystery to solve Rick needs Nell as much as she needs him. Yet with a past as checkered as his, can Rick ever be good enough for this beautiful heiress? It's something he's willing to prove…

The Wild Ones: What will it take to tame these rebels?

Scene set-up: Rick has just shown Nell how to perform some maintenance on her van. Their growing friendship is not…uh, helping to allay their growing attraction to each other.


Nell couldn’t stop herself from beaming at Rick. ‘Thank you!’

He grinned that slow grin that could turn a woman’s world upside down. Her heart pounded up into her throat and back again to bam-bam in her chest. She swayed.

He reached out to steady her, but she shot to her feet and stumbled. He rose too—as if attached to her by some invisible string—and again he reached out a hand to steady her. ‘You’re a bit wobbly on your feet there, Princess.’

She didn’t know if it were the touch on her arm or the way his teasing swagger didn’t quite reach his eyes, but the ability to lie had deserted her. Either that or she’d flung it away recklessly. And she hadn’t done anything reckless in fifteen years.

‘I’ve been off balance ever since I saw you standing on my front veranda, Rick.’

All signs of teasing fled. ‘Princess…’

One of his fingers slid up her arm. She glanced down at it. ‘That’s not helping.’ But the finger didn’t stop—it moved back down from her elbow to her wrist, tracing a path along the inside of her arm.

She wanted to dash herself against him like a wave against a rock and encompass him completely. And still that finger trailed paths of spiralling heat and delight across her skin.

‘That makes both of us, Princess, because I find it hard to remember my own name when I’m around you.’

‘But I can’t remember any of them at the moment so you better start reciting them to me, Rick, because…’

They moved an inch closer to each other. ‘Because kissing you is the only thing I can think of.’

They reached for each other…and stopped at the same time. Nell glanced at her greasy hands. Rick glanced at his. She didn’t want to ruin his shirt, but… ‘I don’t care about my dress,’ she whispered.

His mouth hooked up in that way. ‘But I like that dress. The things I dream of doing to you while you’re wearing that dress would make you blush, Princess.’

‘I care about the dress…’ But his words emerged on a rough growl and they wrapped around the base of her spine until she trembled with the force of it.

His hand reached for hers, their fingers lacing. One tug brought them chest to chest. He glanced down at her and his eyes darkened. Very slowly she slid against him, relishing the feel of his hard chest against her softness.

His quick intake of breath curled her toes. ‘It seems we don’t need hands,’ he murmured.

His thumb brushed against the sensitive pulse point of her wrist. Very slowly she turned her hands so his spooned them before dancing her fingers across the backs of his fingers and then lacing them through his again. ‘I like hands.’ The words came out on short, jerky breaths.

His hands tightened about hers. She tried to glance up at him, but her gaze caught on the pulse pounding at the base of his jaw. She ached to touch her lips to the spot. She wanted—

She looked up at his hoarse rasp.

Very slowly his lips descended towards hers. She held his hands tightly as the world tilted and, leaning her weight against him, she reached up on tiptoe to help close the distance between them.

Nell is running her own cupcake business. She makes the most wonderful cupcakes that have ever been seen in all sorts of exotic flavours. Just for fun, what's a cupcake flavour you'd like to see for sale in Nell's business?

Email ThisBlogThis!Share to TwitterShare to FacebookShare to Pinterest
Labels: michelle douglas, Sunday smooch, The Rebel and the heiress