Today we have a smooch from Mr Right at the Wrong Time by Nikki Logan, but first ...

The winner of last week's Sunday Smooch Giveaway (MELT!) is -- Natalija!  Natalie has also chosen the new name of her writing space ('The Plotting Shed') which was suggested by Laney4. So you both get a book. Yay!
Congratulations, Natalija and Laney4! Can you please contact Natalie at: Natalie (at) natalie-anderson (dot) com and she'll send you a copy of MELT. 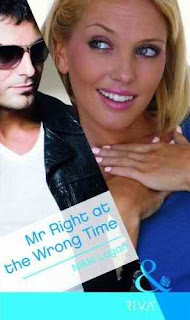 With those words, Sam abseils into Aimee's life...and changes everything. He stays with her throughout a long, terrifying night after her car-crash--and, balanced precariously on a cliff, they form a bond that is compelling, all-powerful and...forbidden. For Sam is not free to give Aimee everything she deserves.

This is the trickiest Sunday Smooch I've ever had to do because the best kiss between these two is riddled with spoilers and so I've had to go with a teaser kiss instead.

This kiss happens right at the end of a long, agonising night in the dark with Aimee trapped in her crashed car and Sam staying with her and keeping her alive, warm and sane. They've done some serious bonding and half-delirious Aimee is drawn to him in a way that she can't explain. Sam knows what Aimee is going to see out the shattered window when the sun comes up and he knows it's going to paralyse her with fear. He stretches half across her to block the terrifying view and keep her eyes firmly on his. Slowly, he helps her back from the brink of terror...


Sudden noises outside drew his focus briefly away and when it returned it was intent.
‘Aimee… The extraction team are getting into position. Someone else is going to be taking over but I’m not going to leave you, okay? I want you to remember that. We’re going to get buffeted and separated for moments but I’ll always be there. I’m still tethered to you. Okay?’
She nodded, jerky and fast, curling her hand hard around his, not wanting to let go. Ever.
He stroked her hair back. ‘It’s about to get really, really busy and no-one’s going to ask your permission for anything. They’ll just take over. You’re going to hate that but be patient. You’ll be up the top in no time and then you’re back in charge.’
Her laugh was brittle and weak at the same time. ‘I thought you were in charge.’
His smile eclipsed the sunrise. ‘Nah. You just let me think that.’
She sobbed then and pulled his hand to her lips and pressed them there. He rested his forehead on hers for a moment as the clanking outside drew closer.
‘I wet myself,’ she whispered, tiny and ashamed.
He wiped a tear away with his thumb. ‘It doesn’t matter.’
‘I don’t think I can do this.’
‘You can do anything in this world that you set your mind to, Aimee Leigh.’
His confidence was so genuine and so awfully misplaced, but it filled her with a blazing sort of optimism. Just enough to get her through this.
Just enough to do something really, really stupid.
She stretched as far forward as the flexi-straps would allow, pulled him by his rescue jacket toward her and mashed her lips into his. Heat burst through her sensory system. His mouth was just as warm and soft as it had felt on her fingers, but sweet and strong and surprised at the same time, and salty from her own tears. She moved her lips against his, firming up the kiss, making it count, ignoring the fact that he wasn’t reciprocating. Just insanely grateful for the fact that he hadn’t pulled back.
Her heart beat out its triumph.
An unfamiliar face dropped in spider-like at their side window just as Sam tore his mouth away from hers. A dozen different expressions chased across his rugged features in a heartbeat; pity, embarrassment, confusion, and—there!—the tiny golden glow of reciprocal desire.
The man suspended in space outside the car did as good a job of schooling his surprise as Sam did—maybe they were all trained to mask their feelings—and immediately cracked the glass of her drivers-side window. One part of her screamed at the intrusion of sudden noise and calamity, but it was just as well.
What would she have said, otherwise?
Sam gathered himself together faster. He looked out at the crew now swarming over her Honda and then back at her. And then he smiled. And in that smile was understanding, forgiveness and just a trace of regret.
He brushed her hair back from her face one last time and Aimee thought she’d never again be able to brush her own hair without imagining his calloused fingers doing it for her.
‘Okay, Aimee,’ he breathed. ‘Here we go...’


To be in the draw to win a signed copy of Mr Right at the Wrong Time, let me know what you think the attraction is for firemen or soldiers or emergency paramedics. Is it just the uniform, is it because they risk their lives or are we instinctively drawn to uber protective men?

Come back next Sunday, when the winner of today's giveaway will be announced -- and we'll post a smooch from the intriguingly named "Gentlemen Prefer Nerds" by Joan Kilby!
Posted by Nikki Logan