The Second Time Around.

I was watching a early morning news program the other day and saw the wonderful story about an elderly couple, both in their eighties who had just married. Both had been widowed many years before and had met and fallen in love at their retirement home. It was a lovely, romantic story and it got me thinking about some of the novels I've read over the years, or movies I've watched, where one or both characters fall in love even though they never expect to again. You know, the ones where they've had the great love of their life, and once lost, it can never be repeated or replaced.

Sleepless in Seattle, is an example. This is one of my favourite romantic comedies with incredible chemistry between the two main characters (Amazing since they actually only appear in about three scenes together for the entire film) The hero, Sam, lost his wife eighteen months earlier and is trying to keep it together for the sake of his son. In one scene Sam is talking to a radio talk show doctor and she said something that I often think about  - "People who have truly loved once, have a strong chance of falling in love again." Of course the hero of this movie didn't think that was at all possible - until he spotted the gorgeous Annie at the airport, and experienced the 'thing'. 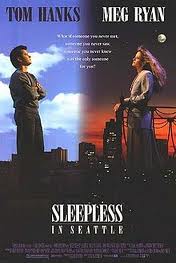 So, the thing of course is the thunderbolt - the love at first or second sight.

The movie Jack & Sarah is another example of love the second time around. Again, the hero has lost his wife in tragic circumstances and thinks he'll never love again. Of course he's wrong, and the journey of how he falls in love with the totally inappropriate nanny is delightful.

Many years ago I read a book by Ruth Wind, called Her Ideal Man. The hero had lost his wife and was raising his son alone. Enter the heroine, a weekend trapped in a snowbound cabin, an unexpected pregnancy and hasty wedding and presto, the makings of a fabulous torchy romance. I love this book. It's one of my keepers and a great example of love the second time around. There's something a little magical reading about a character, particularly a hero, who's sworn off love becuse the great love of his life is gone - but finds himself falling again when he least expects it. 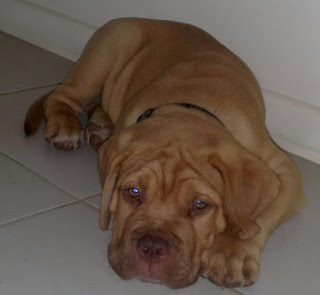 But there are other kinds of second time around love. A elderly friend recently lost her beloved pet - a dog amongst dogs. After having her faithful companion for fourteen years she grieved and swore it was the last dog she would own. She insisted no other dog would ever compare to her treasured pooch. But six months later a new dog came into her life - one she aquired from an animal shelter. So, two hearts saved. My elderly friend now has a young dog and a new lease on life herself. Many years ago I owned a Great Dane called Libby. To me she was the dog of all dogs and I thought would never be replaced in my heart. Until two years ago and my husband brought home an eight week old Dogue De Bordeaux pup (That's him above, soooo cute) His name is Barney and he now weighs over 65kg - and he is awesome.

And the couple who met over bingo at the retirement home? Well, they both said they weren't  looking for love, but it found them anyway. And perhaps that's why second time around themed books and movies have such a huge appeal. They hint of a chance at happiness. They give us hope.