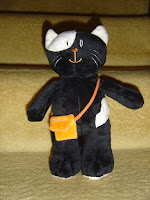 It started me thinking about how cowardice is a trait we romance writers never give to our heroes. Villains, you bet, but never our heroes. And I started to wonder, Why not? I mean our heroes are never perfect. It’s vital they have at least one flaw to make them both believable and interesting. After all, part of the joy of a romance novel is to watch the characters grow and to experience that growth right alongside them.

Emotional cowardice is rife in romance—how many heroes have you read who are scared to risk their hearts again after a bad experience or who are simply too afraid to believe in love—but I’m talking about physical cowardice here. Hmm, and I best temper that. There have probably been heroes who have a phobic fear—of flying, of snakes, of heights, claustrophobia, etc. But do you know any heroes in category romance who have been afraid of and do their best to avoid a physical confrontation with a villain?

I can think of heroes who are ugly, rude, angry, overbearing, stubborn, reckless, frightening, ruthless, and even humourless, but cowardly? Nuh uh. (I can’t think of one who is stupid either, come to think of it.)

I can think of heroes, particularly in paranormal romances or romantic suspense, whose speciality is not fighting but who do have some special talent (their psychic powers will save the world, or their super-duper whizzness at computer coding will expose corrupt governments) and, hence, they have a bodyguard (usually the heroine). And when the fighting starts they try to stay out of the way because that's usually in everyone’s best interests. But it’s not that they’re frightened of fighting, they just know they’ll get in the way (and most of the time they get involved anyway).

So my question, dear reader, is this: could you love a hero who avoids a physical confrontation with a baddie because he’s afraid? Even if by the end of the book he has faced his fear and overcome his cowardice?