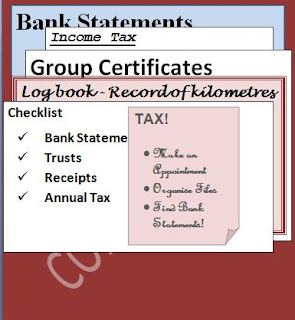 Making me smile!
Luncheon at the Langham...
Do I deserve to take a break? Nope!
Am I gonna anyway? Yup, you betcha! :)

Anyway, anyway, I'm still feeling awfully clever! It wasn't easy, but I prevailed! Of course, it was made a lot harder by the fact that I'd started organising the papers... but then stopped with every intention of coming back to them in a day or two.... not more than twelve months later. Sadly, the thought processes that had seemed so logical three hundred and eighty... ninety... whatever... days ago, were gone, gone, gone!

Worst problem was the whole year of missing bank statements - just vanished.
The year before - in the file where they should be.
The year after - in the file where they should be.
But the 2008-2009 ones - nowhere to be found. Maybe I'd be able to get them on-line, I thought hopefully... but no, the bank was way too organised. They only show the 2009-2010 in archive because naturally they expect everyone to have efficiently finished with 2008-2009, don't they!

So I pressed on, leaving post-its all over the things that needed to be revisited, until finally everything was sitting in nice little piles... some of the piles were even post-it free which was very exciting. Realising that I couldn't do more until I'd been to the bank to get copies of those missing statements, I moved on to filing the pile of documents for 2009-2010 so that when I started on those, they'd at least be a little organised. So I'm working away and... ta-da! There were the elusive bank statements!

Note to self for the future: Put things where they belong - not in special places for safe keeping!

So, are you one of those super-organised people who do their tax returns as soon as you have all the papers? Or are you like me and procrastinate until it all becomes a bit of a monster!
Posted by Sharon Archer