Maybe it's an overdose of technology and gadgets (and sometimes too many things going wrong all at the same time) but recently I've had a hankering to going back to the real thing rather than having everything digital. 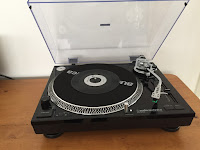 When my husband asked for a new record player (or whatever they're called these days) for Christmas I was thrilled because it meant we could drag out all our old vinyl and play them. Funny...these songs are all available on Spotify or Pandora but holding the actual record had tons of memories flowing back much more than the digital version ever did. And we'd forgotten about the pesky details of having to get up from the chair and turn the record over when it's finished. But there's no better sound than the needle in the groove. Our boys were entranced by the whole thing and declared the sound was much better 'old school'. 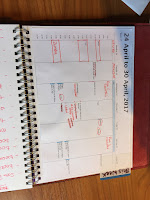 I've also gone back to a journal for planning and brainstorming rather than just an online calendar and an open word document. As a family we share an ical file so I still need to know who's doing what and where, but now I print off a calendar every week, stick it in my journal and go from there. My to-do list is handwritten- that seems to fix things in my brain more than my excel lists. 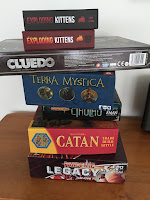 We've started playing board games again too. Even the kids enjoy a game of Cluedo or Pandemic and we've introduced many a friend to Exploding Kittens after dinner rather than slumping in front of the TV (which I still do far too often).

Then there's the ebook-paperbook conundrum....

And what to do with the hundreds of redundant CDs and DVDs and VHS videos...


Don't get me wrong, I'm not a Luddite--I embrace technology that makes my life easier...but sometimes I like to have a real product in my hands rather than the idea of one on a device.

What about you? Are you 'old school'? Have you bought into the new vinyl fashion? Any good new records to recommend?
Posted by Louisa George