... the winner of last week's Sunday Smooch Giveaway is Helen.


Can you please contact yvonne (at) yvonnelindsay  (dot) com to receive your copy of The Wedding Bargain.


And Doctor makes three ...
Nurse Karina Brown only has room in her heart for one guy: four-year-old Mickey. Running a small-town surgery and looking after a little boy with Down's syndrome isn't easy, but Karina wouldn't have it any other way.
Until Mickey's co-guardian, gorgeous Dr Logan Pascale, moves in to their home - determined to sell up! His heart is on lockdown but soon, united in their love of Mickey, Logan and Karina are falling for each other too! Can Karina persuade Logan that everything he needs is right under her roof ... already? 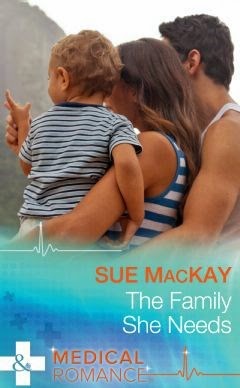 Scene set-up
Logan has PTSD and just been woken from a nightmare by Karina. She's made him a hot chocolate and takes it into the lounge where he's decided to sit by the fire for the rest of the night. Karina's heart is heavy for him and wants him to talk about what's happened to him, but knows that isn't going to happen any time soon. So she goes for another tactic.


When she’d finished stoking the fire she turned to him with a smile and he said, ‘I like it when you smile.’ It warmed him and curled his toes. Not to mention tightened his groin.


The situation just kept getting more complex by the day. So he shouldn’t now be running his finger down one of those bewitching pink cheeks.


Putting his mug aside, he reached to cup her chin, tipped her head back further, all the better to see every expression flitting across her face. ‘I don’t smile enough?’


‘Nope.’ She’d stopped smiling. Instead she looked sad. For him?


He bent his head closer to that tantalising mouth, grazed his lips across hers. ‘I’ll try harder,’ he murmured.


Karina whispered something he didn’t catch as he touched her mouth with his, pressing harder this time. She obviously hadn’t said stop, because right at this moment she was pushing her warm body against his hungry one.


He responded by increasing the pressure of his kiss, and when her mouth opened under his he slipped his tongue inside that sweet cavern and tasted her. When Karina danced her tongue across and around his mouth he lost all sense of everything except this wonderful woman his arms were suddenly wound around. She was exquisite: delicate yet strong, soft yet fiery, sweet yet acid.


A low growl slid across his bottom lip. Karina jerked back, taking that sumptuous mouth with her. Her eyes were filled with some strange emotion he didn’t dare put a name to in case it echoed his own need. Her tongue traced her lips where moments ago his mouth had been, as though she was savouring him.


Then she tamped down hard on all his heat and the sensations racing through his body.


But they just had, and he wasn’t ready to stop, no matter how sane and sensible that might be.


She continued as though he hadn’t spoken. ‘It won’t solve a thing. Will make everything worse, if anything. We want different outcomes with this house, with Mickey’s living arrangements, with my life. We need to keep talking, get to know each other so we understand where we’re both coming from and where we’re headed.’


She dropped into one of the armchairs.


Damn, she was so right in one way. But he sought oblivion from the nightmares and where better than in Karina’s arms? Unfortunately it seemed Karina could haul the brakes on far easier than him.

Do you prefer small-town or big city settings for the stories we write? I'd love hear what you say.