Today we have a smooch from Temptress in Training by Susan Gee Heino, but first ...

the winners of last week's Sunday Smooch Giveaway are --
Sonali and Kaelee!

Congratulations, ladies! Can you please contact Christina Hollis at christinahollis (at) hotmail (dot) co.uk , and she'll send you each a copy of Weight of the Crown.

And now for today's Sunday Smooch from Temptress in Training by Susan Gee Heino ... 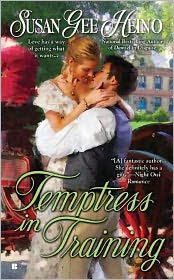 A handsome earl and a beautiful seamstress are looking for answers. Both are willing to do what it takes to get them--even if it requires a little seduction.

Whether mending a ripped corset or constructing velvet pantalets, Sophie Darshaw is skilled with a sewing needle and in high demand at Madame Eudora's brothel. But dreams of a better life lead Sophie away from the brothel, and into the arms of a dangerous man...

After the Earl of Lindley's search for the double agent who killed his family keeps leading him to Miss Darshaw, he begins to suspect she's somehow connected to the plot. Bedding her seems like the best way to get some answers. But Sophie learned a few things from the girls at Madame Eudora's, and she's ready to put them to use...

She must have recognized the icy reality of revenge on his face. She took a step backward, away from him. The glow from the lamp hanging near the doorway spilled out into the yard where they stood. The warm light played against the heavy shadows, making her eyes seem endlessly deep and her skin endlessly tempting. Emotion only allowed her to draw short, halting breaths. Her worn gown pulled against those unignorable curves. Damn it, why couldn’t he forget just for these moments how beautiful the girl was? “Maybe you can’t feel compassion, but surely you can feel something,” she said, swallowed, and gave the tiniest hint of a smile. “You are, after all, a man.” Oh, he felt something, indeed. He just did not wish to discuss it at present. “My feelings are hardly your concern, Miss Darshaw. Go back to your father and say farewell.” Now she regained that hesitant step she’d taken away. “Please, I’ll do anything.” She let that phrase hang in the air. He knew exactly what it meant. Holy hell, could he actually be tempted? “Anything, my lord,” she repeated with another halting step closer. By God, he had to admit anything sounded remarkably enticing. She was barely a hand’s span away. Every soft curve of her body and every slight tremor in her lip lured him. She offered herself for the sake of her treacherous father and Lindley wished to heaven he had the resolve to refuse. He did not. Reacting before his better judgment could intervene, he pulled her into his arms. She was either eagerly willing or too shocked to protest; he really did not care one way or the other. All that mattered was that her face tipped up toward his and he was finally able to capture those tremulous lips with his own. She was as soft and delectable as he’d often imagined. He pressed her for response and was pleased to find one. Her fingers dug into his coat, clinging to him as if she were as desperate for his touch as she was to rescue her father. He explored her mouth with his own, willing her to forget everything but this moment. Damn, but it would have been easy enough for him to put all his many worries aside and simply enjoy the feel of her, the taste of her. Of course he could not afford it, though. There must be purpose to this madness. He might allow her to crumble into mindless desire, but he would have to remain in control. He must use her for his objective and never forget what that was. God, he wished he could forget, though. Holding Sophie, hearing her muffled moan and feeling the heat that flowed between them, Lindley would have given nearly everything to believe this was real. Yet of course he’d already given everything and he knew for a fact Miss Darshaw was not what she seemed.

This is the third in a series, so as a prize to one lucky winner, Susan is offering signed copies of ALL THREE books, MISTRESS BY MISTAKE, DAMSEL IN DISGUISE, and TEMPTRESS IN TRAINING.
To be in the draw, let Susan know what temptations you just can't seem to avoid. Chocolate? Shoes? Daring young men in cravats!?
Posted by Robyn Grady