Today we have a smooch from The Secretary's Secret by Michelle Douglas, but first ...

the winner of last week's Sunday Smooch Giveaway is --
Linda!

Congratulations, Linda! Can you please contact Susan at susan-gee-heino (at) yahoo (dot) com, and she'll send you copies of Mistress by Mistake, Damsel in Disguise, and Temptress in Training.

And now for today's Sunday Smooch from The Secretary's Secret by Michelle Douglas ... 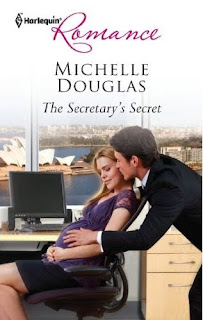 Expecting a secret bundle of joy!
With one last look in the mirror, Kit Mercer prepares to face her boss—surely he can't wait to sweep her into his arms again and declare his love?

Actually, what Alex Hallam does is tell her their fling can't continue. He knows it's the right thing to do—after his ex-wife's lies, is he really ready for a relationship with sweet, lovely Kit?

Until Kit reveals she's pregnant! Swapping the boardroom and working lunches for the baby clinic and wake-up feeds, they'll get more than they bargained for…. Maybe even swapping their business contract for a marriage certificate!

[Set up: Kit is pregnant with Alex’s child, but Alex is far from ready for fatherhood. They are sitting on a break water overlooking the ocean when, for the first time, Kit feels the baby kick. She grabs Alex’s hand and presses it to her stomach, hoping it will forge a connection between him and the baby.]

His eyes widened. 'This is the first time?'

She couldn't get the grin off her face. 'The very first time.'

Alex's wonder made him look younger. The grooves either side of his mouth eased, the creases around his eyes relaxed and the darkness in his irises abated, his lips tilted up at the corners, and it all made Kit catch her breath.

Beneath her hand, his hand tensed. She dropped her gaze to stare at their two hands. Neither one of them moved, and in less than a heartbeat desire licked along her veins. She wanted to lift her gaze and memorize every line and feature of his face, the texture of his skin, while she could. So she could have this memory for ever.

She didn't need to look up to do that, though. His every feature was already branded on her brain. She knew that dark stubble peppered his jaw. Alex needed to shave every day, but he'd skipped that chore this morning, eager to get started on the painting instead. Her palm itched to sample that roughness, her tongue burned to trace it, to taste it...to tease him.

Today he looked more like a disreputable pirate than a civilized businessman and a thrill coursed through her at the danger she sensed simmering just beneath the surface.

Finally obeying the silent command she sensed in him, she lifted her gaze to his. At the edge of his right eyebrow was a tiny nick, as if he'd once had a stitch there. She'd always meant to ask him about it, but her breath came in shallow gulps and her pulse had gone so erratic she didn't trust her voice not to give her away.

His eyes burned dark and hot as they travelled over her, and her soul sang at the possessiveness that transformed his features. No longer afraid of revealing her desire for him, she lowered her gaze to his lips. Need, hunger, thirst all speared into her. Her lips parted. Her eyes searched out his again, pleading with him to sate her need. If she couldn't taste him just one more time she thought she might die.

Still Alex held back, his eyes devouring her face as if he was picturing in vivid detail every caress he meant to place there. He didn't lift his hand from her abdomen and it felt like a promise. His fingers splayed, sending darts of need right into the core of her, making her tremble with the intensity of her desire.

His other hand came up to cup her face, his thumb traced the outline of her bottom lip, dipped into the moistness of her mouth, traced her lips again, moved back and forth over them as if to sensitize them to the utmost limit of their endurance before taking her to the next level with his lips and mouth and tongue.

She started to pant, wanted to beg him for his lips, his mouth, his tongue, but still his mouth didn't descend. With a low growl she flicked her tongue across his thumb. He stiffened as if electrified. She drew his thumb into her mouth, circled it with her tongue, suckled it until his eyes darkened to obsidian.

And then finally, slowly, inexorably, his head lowered and her blood started to sing. His body blocked out the sun and, as he moved closer, all she could see was the light reflected in his eyes. His lips touched hers, moved over hers—surely, reverently, thoroughly—her eyes fluttered closed and, as the kiss deepened, light burst behind her eyelids. Every wonderful Christmas, every sun-drenched summer and visiting dolphin, every bright and beautiful thing that had ever existed in her life gained a new vitality in that kiss.

The need and the energy, it took her and Alex and merged them into a sparkling, flaming oneness until, body and soul, she didn't know where she ended and Alex began. It was the kind of kiss to shape worlds and change lives. It shifted the foundations of her world and all she believed about herself.

Alex eased away from Kit. He didn't know for how long they'd kissed. He barely knew which way was up. Very slowly he drew his hands away—one from her face, one from her stomach. He tried to stop his legs from jerking in reaction.

Her voice came out soft and husky, as if he'd kissed all her breath away. Served her right for kissing his breath clean away too.

He nodded and cleared his throat. 'And you?'

She had stars in her eyes! No woman should look at him like that.

An imaginary noose pulled tight around his neck, and yet for a moment all he could see was the shine on her lips and he ached to sample them again.

'I'll be holding my breath till it does.'

He closed his eyes. He was in way over his head.

Michelle is giving away a signed copy of The Secretary's Secret. To be in the draw, tell us what you think Kit and Alex should call their soon-to-be new arrival.

The Secetary's Secret is out now in the UK and
will be on North American shelves in December
and in Australia/NZ in January 2012!

Come back next Sunday, when the winner of today's giveaway will be announced -- and a smooch from Natalie Anderson will be posted!