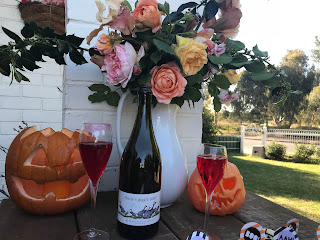 I'm a day late, I know, but last night we celebrated Halloween in my house - something I didn't grow up with an appreciation of. Like most Australians, I saw this holiday as an American invention, and didn't want a bar of it. But alas, the internet has come a long way since my childhood and homogenised EVERYTHING, so that my kids see Halloween as a delicious little birthright.

The first year our house was trick-or-treated, in 2009, I was caught off guard. As a diabetic, I have to have lollies on hand for low-sugar emergencies so fortunately I was able to send our enthusiastic little Halloweeners off with some 'candy'.

And I learned my lesson. The next year, I made sure to have a stash by the door. Year after year, the tradition - and occurrence of visitors - grew. About three or four years ago, Woolworths started to stock a full-blown section of Halloween merchandise; surely the biggest sign yet that the holiday has reached mainstream acceptance level here in Australia.

Now, I used to be a nay-sayer, and I've crossed over to a Halloween-loving mega-enthusiast (this will surprise no one who knows me and my love of all things celebratory.) There are a lot of people still in the anti-Halloween camp, which got me curious about the origins of Halloween.

It turns out, it has its roots in the ancient Celtic festival of Samhain. Around 2,000 years ago, Celts believed that the midway point between summer and winter made it easier for spirits to pass from their world to ours. The would dress in scary outfits to ward off evil spirits, leaving room only for their benevolent ancestors.  Enormous fires were lit, and all of the houses in the village would extinguish their own fires and renew them with the communal flame. It sounds to me like it began as a festival of appreciation and togetherness. It was adopted into Christianity as All Saints/Hallows Day (1 November), and taken to America with the mass of Irish migration in the nineteenth century.* 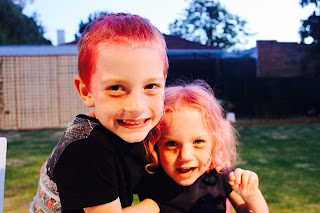 This makes me feel a little more at peace with the celebration, but really, there was simply no way I could stem the tide of my children's enthusiasm for this celebration. For them, it's all about 'candy' and pumpkins, and shouting 'trick or treat' while they run wild with their little mates.

We live in a street that is inundated with children - twenty two of them are under twelve years old! For the last four years, all the kids have dressed in their scariest, most ghoulish outfits and doorknocked their way around the block (the mums enjoy a glass of 'blood' champagne as we accompany them). 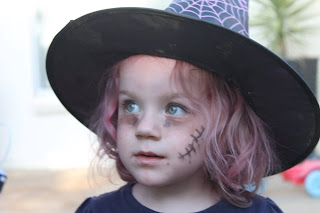 It's funny that millennia later, our little version of Halloween is all about togetherness and communal appreciation, much as it began thousands of years ago (though the spirits I'm personally most afraid of are the little cretins my kids turn into if I don't watch how much of their lolly haul they consume before bed!) 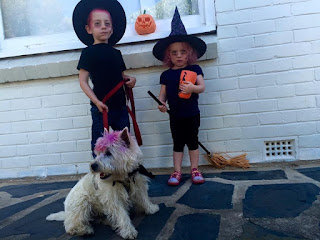 Okay, I'm ready to hear both sides. Where do you fall on the controversial issue of Halloween? Are you over the Americanness of it? Or do you love it like I do? Does your family have any traditions of their own?