Today we have a smooch from Liz Fielding but first...

Can you please contact Annie: annie (at) annie - west (dot) com to receive your copy of The Greek's Forbidden Princess.


And now for today's Sunday Smooch from The Bridesmaid's Royal Bodyguard. 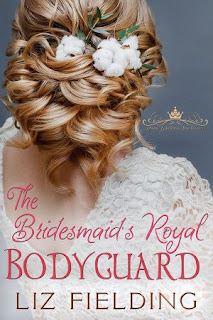 After being sacked from her job on the gossip magazine Celebrity, Ally Parker is forced to return home to Combe St. Philip with her tail between her legs. She is given a fresh start when her childhood friend, Hope, asks her to work PR for Hope’s marriage to Prince Jonas of San Michele.

When Count Fredrik Jensson, head of security for the royal family, arrives to check out the village, he makes it clear that her past employment makes her unfit for the role. The fact that there’s a sizzle between them from the moment they meet only makes everything worse.

Forced together on a trip to San Michele for the official announcement of the wedding, their sizzle flares into an inferno. However, their night of passion sours when he sees her with her ex-boss. Believing that Ally is about to buy back her job with wedding secrets, Fredrik turns back to ice. What will it take to see the person she truly is and a thaw to set in?

“Did you have a good time?”
“You were there. What do you think?”
He just smiled, took her hand and walked her to her door.
She opened it, stepped back but he didn’t follow. “I’m on duty.”
“So this is just work?”
“Someone had to keep an eye on our nearly princess letting her hair down.”
“It was just you?” she asked. “No cocktails, no dancing, no one to talk to. Just a room full of scantily dressed women dancing their socks off.”
“I didn’t notice any socks. Or women.” He reached out and cradled her cheek. “I only had eyes for you.”
Which was when she grabbed him by his T-shirt, hauled him into her room and threw herself at him.
He caught her, one hand tangling in her hair, one on her rear drawing her into his body so that she could feel his need, exult in it as his mouth claimed hers in the kind of kiss that followed a seven-year drought. A deep, intense, no-holds-barred kiss that was only brought to an end by the need for oxygen.
“I thought you were on duty,” she said, breathlessly.
“My duty was to see you all safely home. Hope is in the hands of her maid; Flora has Max to take care of her. That just leaves you.”
Ally giggled. “You’re going to put me to bed?”
“Do you have any problems with that?”
“Just one.” She gave a little wiggle. “I’m wearing too many clothes…”
His eyes blazing with intention, he deftly unzipped her dress and leaving it in a crumpled heap on the floor, picked her up and carried her to the bed.
She was impatient to see him, touch him. She had her hands full of warm, male-scented T-shirt when his phone rang.
Noooooo!
Her scream of frustration was silent. She had no idea what he said. Her French was good, her Italian passable, but there was a local dialect that he made good use of as he dug his phone out of his back pocket and snapped “Jensson”.
He listened, ended the call.
The only word she understood was “Nico” but she could make a good guess at the word he’d used to describe him.
“Don’t tell me,” she said. “You’re back on duty.”
“I’m always on damn duty.” He lowered his head so that his forehead touched hers. “I have to go.”
“Of course you do.”
She held his T-shirt to her face for a moment, breathing in the scent before, with a sigh, she let it fall over his taut stomach.
“It’ll calm down after the ball,” he said, holding her for a moment, his kiss a promise that this was only a postponement.
“Just make sure you turn up for that, Prince Charming, or I’ll have my fairy godmother turn you into a frog.”

For a chance to win a copy of The Bridesmaid's Royal Bodyguard, leave a comment below, answering this question: In this mini series the four heroines reach out for their happy ever after with a prince, a baronet, a royal bodyguard (he is a Count!), and a rock star. Which one would you choose for your own HEA?

Come back next Sunday, when the winner of today's giveaway will be announced and a new smooch from Kandy Shepherd will be posted!