Today we have a retro smooch from Kandy Shepherd  but first 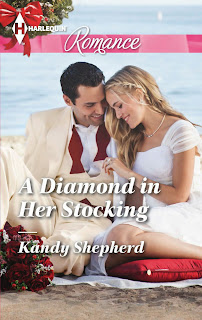 Everyone loves a Christmas wedding!

Chef and single mom Lizzie Dumont is moving on. Returning to Dolphin Bay to make her new restaurant a success, she has no time at all for jaw-droppingly handsome Jesse Morgan—even if she can’t forget that incredible kiss they once shared!

Jesse can’t forget their kiss, either. But the betrayal in Lizzie’s past has made her wary of him, and he hates the fact that she can’t see past his reputation as a heartbreaker. Now he’s on a mission to change her mind—and luckily it’s the most romantic season of the year” Christmas!

(A Diamond in Her Stocking was first published by Harlequin and Mills & Boon  in December 2014. It was again published in January 2017 as one of the three linked Dolphin Bay stories in Heart of the Bay, published by Mira. This month it’s published in Germany as Weihnachtshochzeit Am Weißen Strand which seems to translate as Christmas Wedding on the White Beach!)

Divorced single mother Lizzie Dumont’s high-flying career as a chef has crash-landed, taking her from Paris to the small coastal town of Dolphin Bay on the New South Wales south coast. Her newly wed sister Sandy has offered Lizzie the chance to run a new café—and make a new life for herself and her daughter. Lizzie is up for the challenge, there’s only one problem—the unexpected presence of Sandy’s brother-in-law Jesse Morgan. Six months before, at Sandy’s wedding, Lizzie shared a passionate kiss with Jesse, a kiss that ended in humiliating disaster. Jesse has a reputation for being a player and a heartbreaker, not at all the kind of man Lizzie needs in her life. It’s difficult to avoid Jesse but impossible to deny the strong attraction she has for him. Jesse wants to prove to Lizzie that he has been unfairly labelled. In the lead up to the smooch, he finds Lizzie sunbaking in her bikini on his favourite beach. They have an awkward conversation with him in his wetsuit and her wrapped in a towel—until they can deny their attraction no longer.

Jesse still held her hand and when she made no effort to free it he tightened his grip—now he had her so close he couldn’t bear to let her go. He noticed a few grains of sand sprinkled on her cheek, maybe from where she’d pushed her hair away from her face. Reluctant to let go of her hand, he used his other hand to gently wipe off the tiny grains from where they adhered to her smooth skin.

She closed her eyes with a flutter of long fair lashes and he could feel her tremble beneath his touch as his fingers then traced down her cheek towards her mouth. He traced the outline of her soft, lovely mouth and now it was he who trembled with awareness and a stunned disbelief she wasn’t pushing him away.
Her lips parted just enough for her to breathe out a slow sigh and open her eyes. Jesse saw in them both wariness and desire. ‘Jesse, I…’ Whatever she might have been about to say faltered to nothing. She swayed towards him.
He dropped his hand and used it to take her other hand and pull her closer to him, so close he could feel the heat from her sun-warmed body. He pressed his mouth to hers in a soft questioning kiss—she gave him the answer he wanted with the pressure of her lips back on his. As he deepened the kiss he felt the same fierce surge of possessive hunger he’d felt the first time he’d kissed her. Had kissed her then been parted from her.
Six months between kisses and she tasted the same. Felt the same. And he wanted her just as much—more. She kissed him back with a fierce intensity that sent a surge of excitement pulsing through him. He dropped his hands so he could lock his arms around her. With a little murmur she wound her arms around his neck and pulled him close. The towel slid to the sand between them. ‘Leave it,’ he growled against her mouth then slanted and deepened the angle of his kiss.
He’d wanted her from the time she’d first swept him up with her warmth and laughter, set him the challenge of that cool exterior and the promise of passion beneath. He slid his hands up her slender waist, skimmed her small, firm breasts as her heart thudded under his hand and she gasped under his mouth.

There were master chefs, master sommeliers, master chocolatiers—but Jesse was truly a master kisser, Lizzie mused, her thoughts barely coherent through a fizz of excitement. Delicious shivers of pleasure tingled across her skin as Jesse worked seductive magic with his lips and tongue. The scrape of the stubble on his chin was an exciting contrast to the tenderness of his hands on her bare skin.
She kissed him back, lost in the overwhelming pleasure of being with Jesse again. Desire bloomed in the tightening of her nipples, the ache to be closer, and she tightened her arms around his neck, breathing in the intoxicating scent of his skin. Wanting him. Craving more than kisses. She had never been kissed the way Jesse kissed. Jesse the master kisser would be Jesse the master lover and she shivered in sensual anticipation of the discovery.
What was she thinking? She stilled in his embrace.
She could not let herself want Jesse this way.
Lizzie broke the kiss and drew away, pushing against his chest, her breath ragged. ‘Jesse, I can’t do this. I won’t do this.’ Her voice came out wobblier than she would have liked. But Jesse got the message.
He choked out just the one word. ‘Why?’

For a chance to win a signed paperback copy of A Diamond in Her Stocking, leave a comment below in answer to this question: The title of the book implies Lizzie will be getting a diamond engagement ring in her Christmas stocking - What would you most like to find under the Christmas tree this year?