Dora's Happily Ever After 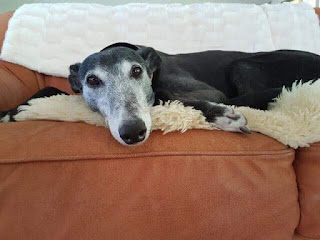 I love a Happily Ever After. Love them in books, love them in movies, and love them in real life. And not just for people. Everyone deserves a HEA, even little girls like Dora.


Dora is an eight-year-old greyhound who was rescued from appalling conditions along with five other greys. She was so thin her little hip bones stuck out, and she was scared and confused. All the rescue groups were full (one has a waiting list of 90 greyhounds), but somehow Dora and her group were still saved. 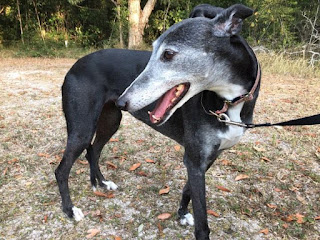 The first job was veterinary assessment, where she was desexed, had her teeth cleaned (and a couple of teeth beyond saving were removed), and some lumps removed. Then she came to me. We had first fostered an 11year-old girl, Cindy, from the same group, but she had died during her vet work as a result of her past treatment (her heart was damaged, most likely from drugs), and we were devastated. The next day, we picked up Dora. 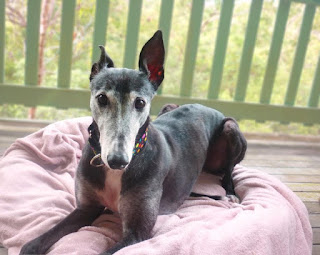 Despite being a senior girl, Dora had never lived in a house before, so she wasn't house trained, but she was also confused by things like the TV, and the reflective surface of the oven door, and sounds like the vacuum. However, for Dora, these were trifles. The big news was that she had soft beds, and discovered the joys of couches. Plus, food! All that food. To start with, we fed her three times a day to get her weight up. She was pretty thrilled with that. 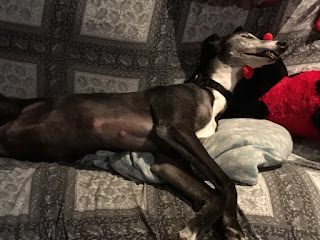 Another favourite new thing was walks. She didn't know how to walk on a lead and would pull and jerk to try to get to all the exciting smells, but it didn't take her long to realise we'd meander over to where she wanted to go if she was patient, and she became a joy to walk.


But her favourite new thing of all was love and affection. At first, she was wary even as she was desperate for pats. She soon learned we could be trusted and lapped up as many kisses and tummy rubs as we were willing to give her.

Her profile was added to the adoption page of the group that had rescued her, Friends of the Hound, and she had her own adoption video, but sometimes the senior dogs take a bit longer than the young ones. After just over four months with us, her perfect home came calling. They had a seven-year-old male greyhound already, and were after a girl about Dora's age. And they'd fallen in love with her over the interwebs. 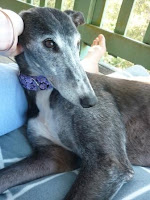 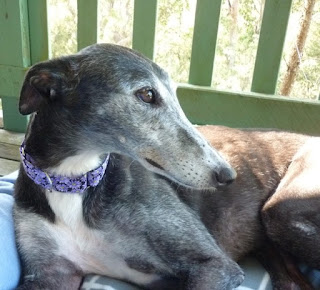 A meet and greet was arranged and we drove all day, from Queensland to NSW, so Dora could meet the humans and hound. It went even better than we'd hoped, and Dora is now officially on her two week trial period with them. Assuming all goes well, they'll adopt her at the end of the trial.


Her new home has soft dog beds and couches and treats and yummy food and a huuuuuge yard to explore at pats and kisses and LOVE. I couldn't have dreamed up a better, more perfect home for her. There have been tears as I've had to leave her behind, along with a piece of my heart, but I know for sure that this is Dora's Happily Ever After. And I couldn't be more thrilled.