A friend was reading one of my books recently. “Why do all your heroines have to be so beautiful?” she asked. (The book was Hired by the Brooding Billionaire and the heroine was indeed beautiful though with a quirky nature and prone to dressing in khakis and steel capped worker’s boots to play down her looks.)

“Because a romance has an element of fantasy,” I replied to my friend. “As readers we want to identify with the heroine. We like to see an idealised image of ourselves and that usually means beautiful.” 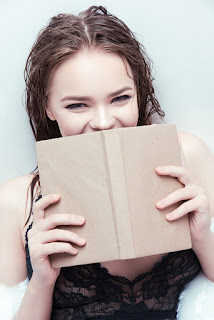 Then I stopped myself. All my romance heroines are not necessarily beautiful. In fact one of my favourite (and best-selling books) From Paradise to… Pregnant! features a heroine who is actually quite plain. The book starts:

“Zoe Summers knew she wasn’t beautiful. The evidence of her mirror proved that. Plain was the label she’d been tagged with from an early age. She wasn’t ugly—in fact ugly could be interesting. It was just that her particular combination of unruly black hair, angular face, regulation brown eyes and a nose with a slight bump in the middle added up to pass-under-the-radar plain.”

Zoe gave herself a makeover and even got a nose job that she confesses to late in the novel. She is immaculately groomed and dresses elegantly. Even so, she still feels a degree of insecurity about her looks. But the hero fell in love with pre-makeover Zoe back when they were teenagers. He doesn’t notice her nose, or care about her hair, he sees beauty in her just the way he is.

Zoe is my only heroine who is out-and-out plain. Others are stunningly beautiful. Mostly they’re attractive or above average in looks. Each has to be written so they are relatable and sympathetic. But they’re always beautiful in the eyes of the hero. That goes without saying!

What about in movies and TV shows? I’m binge watching The Blacklist at the moment. My husband thinks lovely actress Megan Boone is too beautiful to be believable as an FBI profiler. “Can’t they at least have her wearing glasses?” he asks.

What do you think? Does it matter if a romance heroine is beautiful or not? I’d love to hear your comments.

I leave you with one of my favourite movie romance heroines played by Jennifer Grey in Dirty Dancing. She’s often described as plain, but I think she’s beautiful. Can you believe the movie is thirty years old this year?