Hi Everyone,
But before I start- the winner of Sue Mackay's Smooch is Lyn M. Could you please email Sue with your postal details so she can get the book to you.

Now for my smooch....
I am excited to share with you a smooch from my latest release- The Temporary Mrs Marchetti. I love relationship revisited stories as there is always so much going on between the characters. All that simmering history and ongoing antagonism! 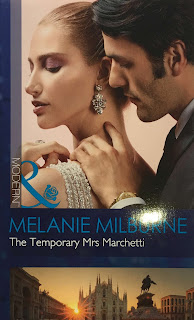 Alice Piper walked out on her Italian lover seven years ago when he mentioned the M word. After watching her mother go through three horrible marriages, Alice has sworn she will never marry. But Cristiano's late grandmother's will states that Alice will co-inherit a luxury villa in Stresa if she marries Cristiano and stays married for six months.

I loved crafting these two characters. Alice is a beauty therapist, and given her aversion to matrimony, has ironically become the go-to girl in London for wedding makeup. Cristiano is a hard-nosed businessman who has never forgiven Alice for ending their relationship after he proposed to her. But unless he does as his grandmother's will states, he will lose a large portion of his company shares to a cousin he has no time for.

Here is a little smooch... oh, by the way- I didn't allow these two to kiss until Chapter Five. Yes, Chapter Five!!! That's because they are both incredibly strong-willed and were both trying not to be the first to break. So much fun to work with such strong personalities! :)


He slid a warm hand around the nape of her neck and drew her inexorably closer, only stopping once her mouth was within a breath of his. 'I'd do you now but I wouldn't want to disturb the other passengers with your screams of pleasure.'
Alice kept her eyes trained on his smiling mouth, her heart leaping in excitement, her whole body trembling with feverish anticipation. Only he could make her sob with pleasure. Sob and scream and shudder from head to foot. How had she resisted him this long? It was crazy to keep denying herself the sensual thrill of his touch. So what if it only lasted a few months? A few months were better than no months. She'd spent the last seven years missing the magic of his lovemaking. Why not enjoy it while it lasted? 'You're not thinking of using one of the bathrooms?'
'No. I'm going to make you wait until we get home.'
Cruel. Cruel. Cruel.
Alice stroked a fingertip over his top lip, following the contours of his vermillion border, his stubble catching on her skin like a thorn on silk. 'I could take things into my own hands...' she said with a suggestive glance.
His eyes glinted and his hand on the back of her neck slid under the curtain of her hair, the slight drag on the roots sending a blot of fizzing electricity down her spine. 'Hold that thought.'
Alice closed the distance between their mouths, touching hers down on his as softly as a butterfly landing on a petal. She eased back but because his lips were dryer than hers they clung to her softer skin as if they didn't want to let her go. He made a rough sound deep in his throat and brought his lips back to hers in a slow, drugging kiss that made her insides coil and twist and tighten with longing. His tongue entered her mouth in a smooth, deep glide that had a deliciously erotic element to it. It called hers into a sensual dance that made her feminine core contract with need. The kiss went deeper, drawing from her a response she had never given to anyone else....

I could continue but I think you get the idea- they might not have kissed for seven years and five chapters but they sure made up for it!

I hope you enjoy The Temporary Mrs Marchetti. I certainly enjoyed writing it and look forward to reading your comments. Given that Alice and Cristiano are strong-willed and determined, what opinion do you currently hold that you can't see changing any time soon?