Ten years ago we sold our house in town and moved out to the Marlborough Sounds to live in our very much smaller beach cottage for two years while we decided on our next move. Yep, those two years have stretched and stretched, and every time we look elsewhere to move to we end up coming home and agreeing we live already in Paradise.

BUT - isn't there always at least one of those? - this place is tiny and at the time of moving here we had another house load of furniture and all the other stuff people collect over the years, including quite a lot of my late mother-in-law's that the boys have yet to sort through. (Another short term project that has stretched)

So we have a lock up that is chock full of furniture and stuff that I doubt we'll ever use again. This week I decided to start sorting and clearing, disposing and yes, keeping some of the contents. I'm already making inroads, though it's going to be a long project as the lock up is a hundred kilometres from where we live, but then on the bright side there's an excuse to go to town and the shops.
The charity shops and tip are going to see quite a bit of me, I think.

BUT - another one - I found these and am going to hang on to them, use them. No point in keeping them if I leave them wrapped in newspaper and stuffed in the back of a cupboard. which means making space here by getting rid of other unused stuff. 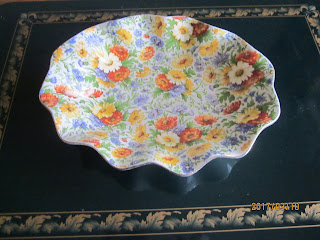 This little plate was my mother's and I like the colours so it's a keeper. 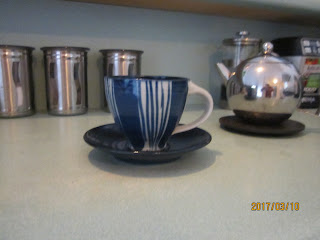 I love my cups of tea, drink gallons of it, and this cup is large, perfect for when I'm writing and don't want to keep getting up to go to the kitchen for a refill. 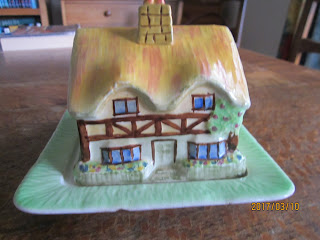 I Strangely I've been looking for a butter dish for some time but hadn't found anything I liked. Guess this was the reason. I love it. Totally odd and quirky. Courtesy of my late mother-in-law it is now in use.
Of course these are the easy things to deal with. Anyone want a chest freezer or a washing machine that's out of its prime or a .... I could go on and on.
Have you got a hoard of things like these hidden away somewhere? Or in use? Or are you more sensible and restrained and have tidy cupboards and shelves?
Posted by Sue MacKay