When I wrote Claiming His Brother's Baby, my January release for Harlequin Special Edition, I kept thinking this is probably my favourite hero so far. I'm sure that will change when the next book comes out, but for the moment I'm just a wee bit in love with Tanner.
I like certain traits in my paperback heroes....integrity of course, that's at the top of the list. Honesty (even if he has to keep things from the heroine, because he always has a good reason) Humour, because I love a hero who can laugh at himself. Strength...not just physical, but an emotional strength that he relies on through the worst of it and when the heroine is making him crazy. And vulnerability....something of an Achilles heel for me (Think Jane Austen's Captain Wentworth from Persuasion...because he's my most favourite hero ever!) A big ask? Maybe. But in the pages of a category romance novel, exactly what readers expect and deserve.
So, what traits do you admire and demand in your heroes?
Leave a comment and go into the draw to win a copy (either eCopy or paperback) of my January release, Claiming His Brother's Baby and I'll announce the winner tomorrow. 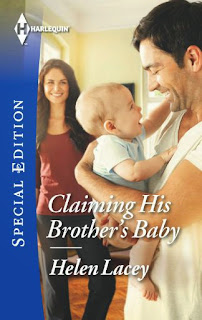