But this time it was something on my husband's list.  We went to the Melbourne Cup in Australia.


This is a big event. It's an Australian horse race that stops two nations, Australia and New Zealand,  on the first Tuesday of November every year. From my very first year at work I can remember sweepstakes going round and even the most ardent of not-interested-in horse-racing types put in a few dollars and got a horse to follow. It's a tradition.


We asked our close friends to join us and off we went for five days in Melbourne, a fabulous city where we indulged in eating, drinking, shopping and going to shows. Then on our last day we went to the Cup.


What a day. Thousands and thousands of people were there, each and every one of them dressed to the nines. The women all wore hats or fascinators. I had splashed out back home when I found a fascinator I fell in love with, and just had to have it. You know that feeling, right? Now I want a wedding to go to so I can wear it again. thought about wearing to my office but as I'm the only one ever in there that would probably make me certifiable. 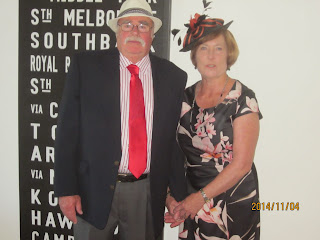 On the rare occasions I bet on a horse race I go by the name of the horse or colour of the jockey's uniform, as does my girlfriend. The guys were adamant from six months back they'd back number 12 no matter what horse it was so it was agreed we'd all do the same. However on the morning of the race I woke very early and as I lay waiting for everyone else the words Number Five popped into my head. So, you guessed it, I backed No 5, knowing absolutely nothing about the horse, not even its name. Apparently it was the favourite. I was called a turncoat by the others for not backing No 12,  which turned out to be an NZ horse.  They got third. I won.  Yippee.  That went some way to paying for the three and a half hour lunch we'd had the day before. 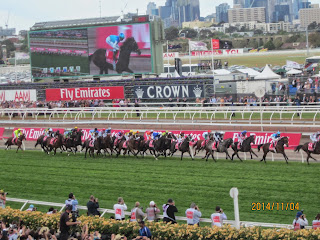 All in all, a great day out and another tick to the bucket lists.


Have you had an amazing, one off day at a major event? Where did you go?
Posted by Sue MacKay