Today we have a smooch from  Amy Andrews, but first
the winner of last week's Sunday Smooch Giveaway is Jo B


And now for today's Sunday Smooch from Girl least Likely to Marry....... 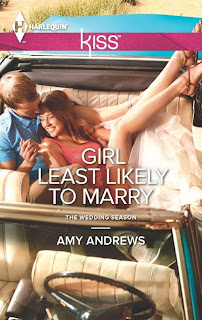 Talk nerdy to me

Samuel Tucker is absolutely the last person scientist Cassie Barclay would ever date. Yes, he's gorgeous, but he's also far too cocky for his own good and thinks that Pi is a tasty afternoon treat. So when he asks her to dance at her friend Reese's non-wedding she's wondering why on earth she says yes!

Tuck is used to people assuming he's all brawn and no brain, and amuses himself by winding Cassie up. But when he finally takes her to bed, suddenly it's Tuck who can show Cassie a thing or two! Can he convince her that love and sex have nothing to do with logic and everything to do with chemistry?Cover & blurb


Scene set-up: Brainiac Cassie has had a very disconcerting reaction to ex quarterback, Tuck. Yes, the geek girl has the hots for the jock. She's horrified but her libido is being demanding and, after talking with her gal pals, she's decided there's only one logical way to fix the problem.....

“...Well, I don’t know if you know this or not, but you do smell pretty amazing."


Tuck smiled. “I have been told that a time or two before.”


Cassie absorbed that information, missing the nuance in her bid to get to the point. “Anyway...I find myself unable to concentrate on my work, and Gina suggested that being a female in my sexual prime, my libido is demanding to be...serviced... and that a spot of...copulation...might be the solution to my problem.”


Tuck felt his erection swell further. He should not be turned on by a woman in shapeless clothes talking about servicing and copulation. Pretty, perky women with enhanced assets and bold use of four-letter words were his staple turn-ons.


And yet he was very turned on. “Copulation?”


Tuck made his way towards her, keeping his pace slow and lazy. “So this is you seducing me?”
Cassie took a step back as his masculine scent drew her into his wild pheromone cloud. “I...guess.”
Tuck stopped when he was an arm’s length from her. He dropped his gaze and took a slow tour of her body. It didn’t take long – there wasn’t a lot he could make out. Her breasts, which he remembered very well from her criss-cross dress last night, were vaguely discernible beneath a voluminous t-shirt that proclaimed, Come to the nerd side, we have Pi.
He smiled at the logo as he lifted a hand and fingered the sleeve. “This is what you wear to a seduction?”
Cassie looked down. It hadn’t even occurred to her to change her clothes. She’d got into her pajamas an hour ago, after her second cold shower. Gina would have a fit if she knew.
“Oh. Yes. Guess it’s not very –” she swallowed “sexy.”
Tuck shrugged. “Funny can be sexy.”
“It’s a tradition,” she explained, as his gaze roved all over her shirt. It suddenly felt like it was on fire. “Gina, Reese and Marnie send me geek t-shirts as a...it’s a joke...”
She petered out as she realised she was babbling. “Sorry. Like I say, I’m not very good at this.”
Tuck disagreed. Cassie’s unique approach was being very much appreciated by one particular part of his body. “So,” he murmured, his fingers dropping from Cassie’s sleeve to stroke up and down her arm, “would you like the standard copulation package or one of the many variations I offer?”
Cassie pulled her arm away as an army of goose bumps marched across her skin and a seductive waft of Tuck flared her nostrils.  “Oh, I think the standard will be fine.” Her voice was husky again and she cleared it. “I still have a paper to get back to. No time for variations.”
Tuck smiled. A man with a less robust ego may have been intimidated by her haste to be done with it. But he was not one to go for copulation by the clock. And she’d given him a goal now – wipe that research paper from her head for the rest of the night.
Or die trying.
“Okay,” he said, stepping in closer to her, until her body a hand-touch away, “long, sweet, slow loving it is.”
Cassie swayed as her senses were engulfed in a wave of him, drenching every cell in a primal urge. She felt his hand warm on her waist, steadying her, and her eyes pinged open, her gaze snared in the brilliant blue of his.
“That’s your standard?” she asked, her voice squeaky.
Tuck shrugged. “I have high standards.”
He brought his free hand up to cradle her jaw. Her pupils were large and dilated, the sound of her breath was rough in his ears, her nostrils were flaring, her mouth was parted. Tuck knew all the signs of an aroused woman. And any other woman would be plastered all over him by now, eager to fulfill his every whim.
The fact that she wasn’t was sweet and quaint and endearing. And vaguely thrilling.
Not that he had any issues with sexually aggressive women. He loved confidence and strength in and out of bed. But this - having a woman waiting for his move for a change - was, strangely, a real turn-on.
Cassie swore she could hear the sluggish grind of gears as time seemed to slow right down. Her head spun with the smell of him and she wanted him to kiss her so badly she didn’t even recognise the woman she’d suddenly become.
“Tuck...” The word spilled from her lips on a desperate whisper she had no conscious control over.
Tuck sucked in a breath. The volume of want in her voice was lashing him with an identical desire. His fingers speared into her hair, his thumb brushing her temple. “What do you want, Cassie?” he asked, his lips slowly descending towards hers.
Cassie was reeling. She could barely think through the fog of pheromones addling her senses, intoxicating her. “I want you to kiss me,” she whispered, the words flowing thick and heavy like syrup from her throat.
Tuck didn’t need it repeated. He swooped the last few centimetres and crushed his mouth against hers. Her lips opened on a whimper that speared straight to his groin, and when her tongue tentatively touched his, heat traced its way there too. He groaned as her mouth opened more and her arms slid around his neck. He pulled her closer, until not even his platinum credit card could have been slipped between them. His hand dropped to her shoulder, skimmed her breast, moulded her hip, and then both his hands moved in unison to the cheeks of her butt hidden beneath layers of fabric.
He pulled her hips in hard, grinding his erection against her. She broke away, gasping, but his lips refused to let her retreat, following and claiming hers again in another hot lashing of lust which she opened to on a tiny little whimper that lit fires in all his erogenous zones.
His hand slid under her shirt, his palm fitting into the small of her back then moving up the contour of her spine. Up, up, up. Her skin was hot and smooth to touch. The arch of her back, the dip of her ribs, the absence of bra strap fueled the fever thrumming in his blood. Lust jabbed him in the solar plexus and he jerked her harder against him.
He needed her naked.
He needed her laid out on his bed.
He needed her calling his name and scratching her nails down his back.

Have you ever had a crush on someone you never thought you would? Someone the complete opposite of who you'd usually go for or someone you didn't even particularly like? I'm giving away a copy (international) of The Girl Least Likely to someone who leaves a comment.
Let's talk crushes! 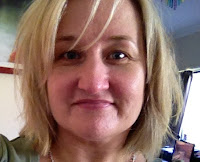 Come back next Sunday, when the winner of today's giveaway will be announced and a smooch from Imprisoned By A Vow by Annie West will be posted!
Posted by Amy Andrews