Today we have a smooch from  Ros Baxter, but first ...
the winner of last week's Sunday Smooch Giveaway is  -Nas

Dirtwater's straight-talking Deputy Sheriff has a lot on her plate: a nicotine addiction that's a serious liability for a mermaid, a solider-of-fortune ex who's hooked on her Mom's brownies, a gorgeous, naked stranger in her shower, and a mysterious dead blonde with a fish tattoo on Main Street.

Oh, and one other thing.
She's scheduled to die on her thirtieth birthday - in three weeks - unless she can 'change the course of destiny and save the world entire'. Throw in a Mom who's the local Mayor and a Dad who's been locked in the county jail for twelve years, and that's all the trouble she needs without her mermaid roots coming back to haunt her.

Rania's heading home to Aegira for a family wedding but she's starting to have a sinking feeling that's got nothing to do with hydroporting seven miles under the sea and everything to do with some weird connections that seem to be emerging between her, the dead blonde, her Mom's shady past and a ten thousand year old prophesy. Now if she can just steal a corpse, get a crazy Aegirian priest off her case, work out who the hell's trying to kill her and stop sleeping with the fishes, she might be able to unravel the prophesy, the mystery of the missing choirgirls and the secrets hidden in her Mom's past. And maybe even save her own ass while she's at it.“It’s  Janet Evanovich’s Stephanie Plum meets Splash in a sexy, smart-talking debut about a mermaid in a desert, a city under water, and the secret that no-one is supposed to uncover.”

Rania has found out some troubling news about Carragheen, the smokin’ hot merman with indigo eyes and a voice like Lucky Strikes and home-made toffee.  He’s married.  With a child.  A fact he omitted to mention when he was pirouetting through the water with her during The Dance of the Dolphins. So she can’t work out why she still trusts him.  But she does know she should definitely not be acting on the crazy urges she has whenever he’s in the same room. In this scene, Rania has been injured very badly by the Bad Guy and, as she recuperates at Carragheen’s Pool, he is trying to explain that there is more to his story than meets the eye...


I knew it was wrong.  Goddamit I knew it was wrong, but I put my hand on his arm and didn’t let him finish.  I didn’t want to hear what he had to say.  I had no idea what it meant, but just for now I wanted to taste him. I knew I’d regret it, thinking about it later.  I am, at heart, a good girl. And there were too many unanswered questions about him now.  I’m Sicilian. Suspicion was burned into my cells at conception. And I’m a cop too. Trusting’s never been a great help in the field.  Especially when someone lies to you from the start.
I felt myself shiver, like my skin was trying to shake off all threat and doubt.
“Don’t worry,” he whispered, dark and close.  He traced one finger around the curve of my face, starting at the place where my hair meets my forehead, then sliding down the outside of one cheek, rubbing my chin with his thumb.  “I will protect you.”
I knew it was true, somehow I knew it was true.  But I had no idea who was going to protect me from him.  Because right now he could do anything to me he wanted.
When he kissed me, it was like my whole body rolled over and said:  Well, finally, that’s what we’ve been after all this time.  It was hot and fierce, but endlessly comforting at once.  His tongue was warm behind the cool of his lips, and his hands traced slow, deliberate circles across my back and through my hair. He laid me down beside him and ran the flat of his hands all over me, like he was trying to imprint the very image of me onto them. The sensation was like nothing I’ve ever felt.  The rough rasp of his warm palms through the cold press of the water.
There was a low, slow ache in my breasts and my nipples were tight and tingly as my stomach slid into a jittery dance, the very center of me on slow burn.  I watched, mesmerized, as the finger that had caressed my face slid down my neck, across my chest and towards my belly, circling my navel in long, slow loops that had my hips starting to buck a little in impatience.
“Rania, Carragheen, it’s time.”  We jumped in horrified unison at Mom’s voice.  I wondered if Aegir himself kept sending people to interrupt us.  And if that should make me worry. As I leapt up, he caught my arm.  His hand was so strong it frightened me and I thought about what I’d heard in his head.  What choices had he meant? What the hell was I doing?
I pulled away, but he cupped big, warm hands around my face. “Be careful, Rania.”
He didn’t try to hide the thought that echoed in his brain as I left.  I will not lose you. 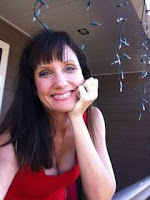 Ever been sprung mid-pash (as we say here in Oz) by your mother or someone else equally as embarrassing?


Come back next Sunday, when the winner of today's giveaway will be announced and a smooch from Outback by Jenny Brigalow will be posted!
Posted by Helen Lacey