Are you a good-guy girl?

I have a confession to make. I like good guys. I know, as a romance writer, it's almost compulsory to like the bad boys. But I've never really fallen in lust with the bad guys.

I know there's a difference between a "bad boy" and a "bad guy". One has a cheeky grin, the other has a maniacal laugh.

But even still, I've always been more of a fan of the good guys. I have a friend for whom it's the complete opposite -- she loves the baddies. The villains  the bad guys, the evil schemer -- that's who floats her boat. I've never shared her interest. 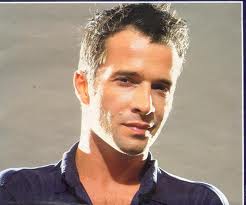 Meet James Purefoy from The Following. If you haven't been watching it, it's a TV show about a jailed, charismatic serial killer who builds a cult following and has his disciples exact his revenge against the world and, more specifically the Kevin Bacon FBI agent who was responsible for putting him behind bars.

I know movies and TV are full of "charismatic serial killers", but to be honest I've never found any of them particularly "charismatic". But this time, yeah, I can almost understand it. (Almost, because no matter how good looking and charming, I really don't think anyone could convince me to do some of the things he convinces his followers to do.)

James was also Mark Antony in the exotic series Rome. Apparently he was a contender for Bond but was beaten out by Pierce Brosnan. (Pity, that.)

So, if you, like me, are a good-guy girl who needs her horizons expanding, I highly recommend checking out The Following and James' cute-yet-diabolical charm.

There aren't any real baddies in my June release SuperRomance, Just For Today..., although I did have a lot of fun with my heroine's ex-husband and a little revenge scene.

Tell me your favourite on-screen villain and I'll chose a comment at random to win a copy of Just For Today...
Posted by Emmie