Can you please contact Rachel at rachel (at) rachelbailey (dot) com to receive your copy of What Happens in Charleston!

And now for today's Sunday Smooch from Anna Campbell's e-novella, These Haunted Hearts 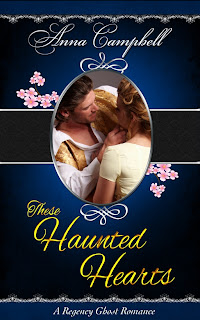 On one fateful wedding day at Marston Hall in 1818, four linked destinies hover in the balance.

Josiah Aston, Earl of Stansfield, wakes to discover he’s seventy years dead and he alone can free his beloved wife Isabella’s tormented soul. But first he must convince her to trust him against all the evidence…

Lady Isabella Verney, beautiful and tempestuous, married the man of her dreams, only to die violently on her wedding day. Every clue points to Josiah as the murderer…

Miles Hartley, Viscount Kendall, is society’s ideal catch, but what does that matter if he can’t convince Calista Aston that he loves her? When an age-old curse strikes, only by proving himself worthy of her faith can he save their happiness…

Lady Calista Aston, noted bluestocking, fears she loves Miles Hartley not wisely, but too well. On her wedding day, her doubts place her at evil’s mercy. When death and disaster loom, is it courage or mad folly to believe that Miles loves her in spite of all her faults?

On one fateful wedding day at Marston Hall in 1818, will the lovers emerge triumphant or will darkness conquer all?

Austerely intellectual Lady Calista Aston giggled with an extremely unintellectual giddiness and allowed the handsome young man to tug her from the empty hallway into the shadowy bedroom. “Miles, I haven’t got time,” she said without sounding in the least convincing.

Through dimness created by drawn curtains, she shot him a disbelieving look. “That’s what you always say.”

As ever when she regarded the man she was to marry, her heart twisted in an agony of love. Tall, golden-haired, charming, Viscount Kendall was like a magical prince out of a fairy tale.
A tide of self-doubt threatened to drown her, in spite of her appearance of light-heartedness. She still couldn’t believe that this superb creature had chosen her from all the women in the world to become his wife.

She was a devotee of logic, of scientific process. Miles Hartley’s partiality for a bluestocking Long Meg like her seemed completely nonsensical. She’d imagine he was mad if she wasn’t herself victim to a madness impervious to research or reason or cold, hard reality. But while she recognized her affliction as permanent, how long would his madness last? Until tomorrow? Next year?

From the moment she’d seen him across her father’s drawing room, she’d fallen under Miles’s spell. She still recalled her incredulity when he’d proposed six weeks later.

Desperately she’d hoped to become more secure in his love as time passed, but with every day of the last three months, her uncertainties had burgeoned. Now, on the afternoon before her wedding, they gnawed at her like starving rats on a loaf of stale bread.

She told herself a thousand times she was a silly goose. Miles said he loved her. He said it over and over. But at her deepest level, nothing convinced her that she was worthy of his regard. He was elegant and brilliant and gifted with a vivid masculine beauty. He should choose a wife who was equally beautiful, a toast of society, instead of a drab wallflower like her. Calista was bitterly aware that with her straight brown hair and long, thin body and strong Aston features, she was no beauty.

With his usual careless grace, Miles kicked the door shut behind him and drew her inexorably into his arms. Another shudder of love ran through her. It was dangerous to love a man as much as she loved Miles.

“It’s your fault.” He smiled at her as though she was as bright and lovely as a rainbow. “If you weren’t so delicious, I’d be happy with a mere peck on the cheek.”

“You’re a sweet-tongued devil.” The grim tenor of her thoughts lent the remark a sharp edge.

His smile turned wicked. “Let me show you.”

He kissed her and she melted into his arms. His mouth opened over hers and his tongue slipped between her lips to tease her into a fever. She was helpless against this passion. It terrified her even as she flung herself into the blaze. From the first, he’d made her feel almost painfully alive. If he ever left her, she had a bleak premonition that she’d never feel alive again. 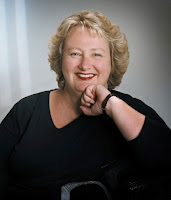 You can find Anna's book at  Amazon and Smashwords!

And Anna's giving away a copy of her novella to one lucky commenter!  So her question to you is:

My latest e-novella, THESE HAUNTED HEARTS, has a touch of the woo-woos about it. Do you like ghost stories? Do you have a favourite?


Come back next Sunday, when the winner of today's giveaway will be announced -- and a smooch from The Last Doctor She Should Ever Date by Louisa George will be posted!
Posted by Sharon Archer