The winner of last week's Sunday Smooch Giveaway from Nicole Flockton and Bound By Her Ring is Jane B!

Jane, please contact Nicole at nicole@nicoleflockton.com and she will arrange your prize.


And now for today's Sunday Smooch from A Wedding She'll Never Forget by Robyn Grady. 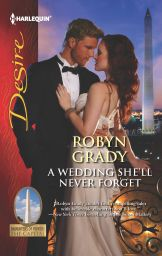 She's been making the "right" decisions all her life. But after elite D.C. event planner Scarlet Anders meets self-made billionaire Daniel McNeal—a rowdy, sexy male who laughs in the face of society—she wishes she could make different choices.

Then she trips over a tangled wedding veil and everything changes. Because the resulting memory loss turns prim-and-proper Scarlet into carefree Scarlet. She jumps at Daniel's offer of a wild affair. Yet when her memory returns, she realizes she's in love with this man—but is he willing to give her a wedding of her own?

[Set-up]  After Scarlet has made herself clear - she isn't interested in Daniel or his live-for-today type - he is dropping her home. He's told her a little about his background and has asked about her parents.


"They live in Georgetown, too," she said.
"Not too close for you?"
"We're a close family. In a healthy way. I make my own decisions. You know. Run my own life."
He chuckled. "Don't try so hard to convince me."
She fell quiet before adding, "Truth is…sometimes they do jump in with an opinion. But I guess most mothers are like that. Overly protective."
He inhaled deeply, then swallowed that damn ache again.
The GPS gave a few more instructions before he pulled up outside a block of upmarket town houses. The rain had stopped so he shut down the wipers. When he left the engine running, however, she seemed surprised.
"You're not seeing me to the door?"
"You don't want me to."
"Wow. You really are trying." Then she cocked her head. "Unless this is a reverse psychology thing where pulling back is supposed to draw me deeper into your web."
He held up his hands. "No webs. I didn't even see the latest Spider-Man flick. Yet."
"I've seen it twice. Right through to the very last credit."
"Well, a movie's not over until you've scanned the hundred names under visual effects."
"Now you're mocking me."
"Never."
She tried to hide a grin. "And here I was thinking you were the type who enjoyed getting a rise out of poor unsuspecting folk like me."
"Only if I'm sure they won't belt me."
"Then I should warn you I have a power right hook."
"Which is why I have only the utmost respect for you."
That twinge of a grin grew. "You do, huh?"
"Yeah." He paused. "I really do."
Her eyes were so bright. In the light filtering through her window, her face appeared almost luminous. Free of pretense. Even vulnerable.
Then, as if realizing that vulnerability, Scarlet's smile faded. At the same time, the space separating them seemed to shrink. That sense of sharing—of connecting—changed…spiraled wider, tunneled deeper. And then he was looking at her in a way he'd vowed that he wouldn't.
The tips of his fingers curled around the leather of the steering wheel. He wouldn't act on the need. Even when that superior force building inside of him was so strong…like a big wave curling over his head, pushing him forward, giving him no choice but to leave his sense of reason behind in the wash.
But in his heart of hearts, Daniel knew. Logic had never been the issue here. Not for either of them.
He edged closer.
When his mouth slanted over hers, her eyes drifted shut and those sweet lips parted on a sigh. Any second, he expected her to pull back. Slap his face. But as one heartbeat bled into the next, she only dissolved against him more as if she wanted him to know that she agreed. Despite her objections, this coming together was always going to happen.
His hand found the curve of her neck, the fast but steady beat of a pulse. As his tongue twined with hers, his fingers combed up to cradle the back of her head. They pressed closer, the kiss deepened and his desire to know more—take more—began to burn in his mind like a torch.
When their lips gradually parted, Daniel didn't sense anger. Certainly not disgust. As his gaze searched her face in the shadows, his hand slid around to cup her hot cheek. The pad of his thumb grazed the moist rim of her lower lip. Slowly her heavy-lidded eyes met his.
"You can't ever do that again," she said.
"That would entail never seeing you again."
"If that's what it takes."
He wanted to laugh. Man, was she stubborn.
"I respect that you don't want to blur the lines between personal and your business commitment to Caroline's wedding," he assured her. "And I heard that you've dated some guy with a digit at the end of his name—"
"I'm engaged," she cut in, and that still-wet bottom lip quivered. "To be married."
His gut kicked. That didn't compute. She was kidding. Had to be.
"I don't believe you," he said.
"We haven't made the announcement. Everett only asked me last night. The ring is being resized. It's an heirloom."
Daniel fell away, gripped the wheel. What the…?
He growled, "Spare me the details."
But there was one thing he did want to know. Why was she marrying a guy she didn't love? Because, while he'd never experienced that emotion himself, Daniel was bloody sure if he'd wanted someone enough to pop the question, he wouldn't be kissing someone else, not for any reason.
Still, that hardly made him a white knight in this situation. If he hadn't kept on. Hadn't insisted on this lift but had left her to stand there alone in the rain…
Shutting his eyes, he pinched the bridge of his nose.
"I apologize," he said. "I'm not a good loser."
"I'm a far worse fiancée." Her head went back against the rest and, as if she were sick to her stomach, she groaned. "Bad doesn't come close to describing how I feel."
"I take responsibility—"
"No. It's my fault." She looked across at him with a gaze that was turned more inward than out. "You see, when I said I didn't trust you, what I should have said…what I should have understood was that I didn't trust myself." 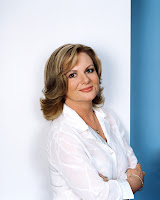 Robyn is giving away a copy of A Wedding She'll Never Forget. To get into the spirit of Valentine's Day, leave a comment telling us what you have planned for Thursday...or what you'd like to have planned for you! You can learn more about Robyn's latest releases at www.robyngrady.com or follow her on Twitter at @robyngrady
Come back next Sunday, when the winner of today's giveaway will be announced -- and a smooch from bestselling Desire author, Paula Roe, will be posted!
Posted by Robyn Grady