Today we have a smooch from Seven Nights In The Rogue's Bed by Anna Campbell, but first ...


Congratulations, Alyssa! Can you please contact Barbara De Leo at barb (at) barbaradeleo (dot) com to claim your prize.

And now for today's Sunday Smooch from Seven Nights In The Rogue's Bed by Anna Campbell .....


Will a week of seduction... 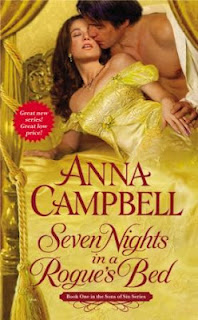 Desperate to save her sister's life, Sidonie Forsythe has agreed to submit herself to a terrible fate: Beyond the foreboding walls of Castle Craven, a notorious, hideously scarred scoundrel will take her virtue over the course of seven sinful nights. Yet instead of a monster, she encounters a man like no other. And during this week, she comes to care for Jonas Merrick in ways that defy all logic-even as a  dark secret she carries threatens them both.


...Spark a lifetime of passionate surrender?


Ruthless loner Jonas knows exactly who he is. Should he forget, even for a moment, the curse he bears, a mere glance in the mirror serves as an agonizing reminder. So when the lovely Sidonie turns up on his doorstep, her seduction is an even more delicious prospect than he originally planned. But the hardened outcast is soon moved by her innocent beauty, sharp wit, and surprising courage. Now as dangerous enemies gather at the gate to destroy them, can their new, fragile love survive?

[Set-up: Sidonie and Jonas have gone riding on the beach outside Castle Craven, his crumbling lair on the wild Devon coast. He kisses her and realizes she’s never kissed a man before. He’s about to give her a very nice lesson!]


Heat. Softness. Trembling uncertainty. A hidden longing to respond. Jonas tasted all of that when he dipped his lips to Sidonie’s. He couldn’t say why he was so deeply moved to be the first man to kiss her. Her merest presence aroused him. It had from the first. Whatever power she possessed, he was helpless against it.
Experimentally, he nibbled, licked at the seam. She was bewitching. Even now when she conceded little more than she had when he’d kissed her last night. She quivered under his hands. He still wasn’t sure whether she was excited or frightened. He’d read both curiosity and dread in her pansy eyes. Her thick tortoiseshell hair tickled his fingers. After her wild ride, she looked enchantingly disheveled. It made him contemplate other wild rides he’d like to take with her.
Raising his head, he stared at her. Her eyes were shut and her lashes fluttered against flushed cheeks. His nostrils flared as he drew in the evocative scents of the sea and Sidonie.
“Open your mouth, tesoro.” He angled her face higher. “Open your mouth for me.”
At his raw demand, her eyes flared wide. For a drunken moment, he drowned in glorious brown, rich, autumnal, sensual.
“O-open?”
He took advantage and claimed her, sliding his tongue into the interior. She made a sound of surprise and tried to back off. “No.”
“Bella, don’t be afraid.”
She stopped edging away but her lips closed against him again. He returned to demanding nothing more than her stillness. She stood unresponsive, although her choppy breathing indicated she was far from unmoved. She resisted to the point where he thought he’d run mad with wanting her.
Just resistance, resistance, resistance. Endless resistance.
Then in the space between one second and the next, endless resistance dissolved. Her hand curved around his shoulder. On a sigh, she leaned into him. Warmth powerful enough to melt the chill from his obsidian heart enveloped him. The hand on his shoulder flexed into a caress. Her lips parted and at last gave up the honey within. Luxuriously he savored her mouth. She was delicious. His tongue flickered over hers and he heard a smothered protest.
If he had an ounce of charity in his soul, he’d release her. But her flavor was as addictive as gin to a toper. He’d blithely imagined he’d keep his head during this impromptu lesson. Instead she made a mockery of arrogance. She who had never kissed a man.

Leave a comment to be in the draw to win a signed copy of Seven Nights In The Rogue's Bed!