Today we have a smooch from Slow Dance with the Sheriff by Nikki Logan, but first ...


the winner of last week's Sunday Smooch Giveaway is -- efthaliapegios!  And the week before that was Laney4.

When New York came to Texas...


Ex-ballerina Eleanor Patterson is the darling of Manhattan's society-until she discovers her pedigree background is a lie. So she heads to sleepy Larkville for answers....
Sheriff Jed Jackson never expected to rescue a stunning woman from a herd of cattle, or to be so fascinated by the vulnerability beneath Ellie's tough city veneer. Yet watching her unwind is irresistible, and as he helps her learn to dance again he wants to give both Ellie and himself a new beginning....


Disenfranchised New York dancer and heiress, Ellie Patterson, is in Larkville hunting for a family she’s only just discovered she has. She and County Sheriff Jed Jackson have been firing sparks off each other but her long, slow recovery from an eating disorder has taken its toll and made her uncomfortable with intimacy. But Jed’s a rescuer and he wants Ellie to heal. He’s taken her on a ‘date’ to a rare wetland where the aquifer bubbles to the surface in drought-ridden Texas.

The sounds of DeputyDawg snuffling around and ducks quacking broke up the awkward silence.


‘Ellie…’ A warm hand on her shoulder turned her more fully back to him. She hadn’t even realized she’d turned away. ‘I meant that I couldn’t imagine a woman like you settling for being someone’s trophy wife.’


‘You assumed I was saying I don’t think you’re worth trophy-status? Or attractive enough?’


She forced her eyes away, out to the sparkling blue water. Maybe there’d be a miracle and the aquifer would surge up and wash her away from this excruciating moment.


‘Can you literally not see it?’ he murmured.


The open honesty in his voice beckoned. Her heart thumped. She slowly brought her gaze back around. ‘I spent a really long time doubting every part of myself, Jed. And I know how I must have looked to people back then. It’s hard to forget that.’ And to forgive herself for letting it happen.


‘Back then.’ He stepped closer. Removed his sunglasses so that she could drown in his eyes instead of the aquifer. ‘You’re not that girl anymore.’


He stopped a foot away. ‘Take it from a man who never knew you before a few days ago, Ellie, and who doesn’t hold those past images in his head. You are—’ he struggled for the right word and her heart thumped harder at the caution in his voice‘—arresting. You might have detoured on your path to beautiful but you’re unquestionably here now. Has no-one ever said that before?’


The back of her shirt collar was fast becoming a furnace.


‘Or did you just not believe them?’


She took a breath. ‘They would have said anything.’


‘You think they were just trying to get into your bed?’


‘My bed. My inheritance. My seat on the board of Daddy’s company.’


He stared. And stepped closer.


‘So, what happens when a man who isn’t interested in your money or your name tells you you’re beautiful? Do you believe him?’


‘I don’t know.’ She swallowed, though there was nothing to swallow. ‘Words are easy.’


‘What if he shows you?’ He closed the final inches between them, paused a hearts-breath away. ‘Would you believe him then?’


Words couldn’t come when you had no air. Ellie stared as Jed blazed sincerity down at her and the moment for protest passed. Then he lowered his head, turned it so that his hat wouldn’t get in the way, and stretched his neck toward her.


‘I’m supposed to be staying away from you,’ he breathed against her skin.


Her head swam; making sensible words was suddenly impossible. ‘Whose idea was that?’


All she had to do was shrink back, like she had a hundred times in New York on curbsides, in doorways, under lampposts, in elevators. The goodnight moment-of-truth. Step away, mutter something flippant and flee into the night. But, as Jed’s broad silhouette against the mid-morning sun bore down on her, both his hands out to the side as he made good on his promise not to touch her, Ellie couldn’t bring herself to evade him.


Euphoric lightness filled her before her chest tightened.


He continued his slow sink, his body twisting forward so that only one part of them was going to touch, his eyes gripping hers the way his hands were careful not to. A tiny breath escaped his lips and brushed hers a bare millisecond before their mouths met.


His lips were soft and strong at the same time. Dry and deliciously moist.


Heat swirled around the only place they made contact, and Ellie’s head swam with his scent. His warm touch grew stronger, pressed harder, fixing her to him as though they were glued. She moved her mouth against his, experimenting, tasting. Exploring. He reciprocated, meeting her stretch half-way.


She made the tiniest sound of surprise low in her throat. Her stretch? But, sure enough, she stood tipped forward on her toes using every bit of her ballerina’s balance to make sure their lips didn’t separate. 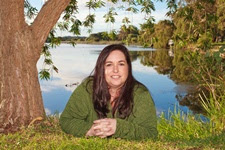 To be in the draw to win a copy of Slow Dance with the Sheriff , tell Nikki what the most amazing wildlife experience you’ve ever had was.


Come back next Sunday, when the winner of today's giveaway will be announced -- and a smooch from In His Eyes by Emmie Dark will be posted!