Today we have a fabulous smooch from Vengeance Born by Kylie Griffin, but first ...

the winners of last week's Sunday Smooch Giveaway are Malvina and Natalie! Congratulations ladies. Please contact CC  on cc (at) cccoburn.com and she'll send you both a copy of Colorado Fireman (CC generously donated two books)

and the winner of the previous Sunday Smooch is Cassandra Samuals - congratulations Cassandra, please contact Emmie on emmie (at) emmiedark.com and she'll send you a copy of Cassie's Grand Plan. 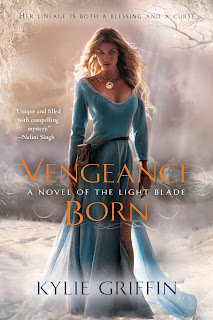 Annika, half-blood daughter of the Na’Reish King, longs for more than her tormented life among her father’s people. Conceived in hatred and bred as a tool of retribution, she’s gifted with a special talent that can heal as well as destroy.
With the Na’Reish vastly outnumbering them, Kalan, a Light Blade warrior, knows the future of humankind depends on him alone. Incursions into human territory and raids for blood-slaves by the Na’Reish Horde have increased. As Chosen-leader, he faces the task of stopping the demons—and convincing the Council of aging Light Blade warriors that change is necessary for survival.


When Annika learns Kalan is a prisoner in her father’s dungeon, her dream of escape seems within reach. She agrees to free him in exchange for his protection once they reach human territory. Now, marked for death for helping him, Annika must learn to trust Kalan as they face not only the perilous journey to the border but enemies within the Council—and discover a shocking truth that could throw the human   race into civil war…

[SET UP - Annika is Na'Chi, a demon-human hybrid. Kalan is a human Light Blade warrior. Their races have been enemies for over 500 years. While Kalan came close to kissing Annika in a prior scene, his understanding of who she is and the connection he has with her has deepened and altered his previous misconceptions of her. This scene is a pivotal turning point for Kalan and the hope and potential contained in their kiss reawakens Annika's hope in a long lost dream of being accepted and loved.]

“I’m a demon . . .”
Annika's whispered words, an echo of his own the evening before, pierced his gut. Her pain challenged him.
“You’re Na’Chi,” he refuted.
“You think I’m tainted . . .”
Less than three days ago he’d have agreed with her. Three days ago, if they met anywhere but in that dungeon below Savyr’s keep, he’d have driven his blade into her heart and used his Gift to kill her. But she’d saved his life, given him his freedom and called into question everything he believed to be true about demons.
“Annika, I don’t understand the attraction between us any more than you do.”
“You continue to toy with me. Why?”
If the situation wasn’t so tenuous Kalan would have laughed. Her suspicion and distrust grated against his pride.
He shook his head. “I’m not toying with you. I have no ulterior motive.”
“You claim you’re attracted to me, yet last night you were repulsed by the idea that you almost kissed me.” Her accusation was shadowed with pain. “Am I to believe you’ve had a change of heart in less than a day?”
Her disbelief was justified. He ran a hand through his damp hair. “Annika, I don’t know what else I can say—”
“Prove it.”
“What?”
She swallowed convulsively. “Kiss me.” Her chin tilted. Flecked with green, her eyes sparkled in silent challenge.
His pulse began to race, his body grew hot, and Lady’s Breath, he was getting hard, turned on by her dare. Closing the distance between them to place his lips on hers took little effort to imagine. A single heartbeat and he’d finally discover what she tasted like.
None of what he was experiencing was making any sense and until it did, kissing her wouldn’t be a good idea.
Her lip curled the longer he hesitated. “Your scent might reek of desire but you’re still disgusted by the fact you’re attracted to a demon.”
“Not disgusted, Na’Chi,” he denied, and deep inside that was the truth. It was frustrating that she continued to see him in such a negative light. “Try confused.”
With that, he dipped his head and slanted his mouth over hers. For the barest moment Annika stiffened, and then placed her hand against his chest to grip his shirt and hold on. He buried his fingers into the soft strands of her hair at the back of her neck to steady her.
Merciful Mother, her lips were soft, silky, and sweeter than any fruit he’d ever consumed. Kalan traced them with his tongue, allowing himself to enjoy their texture and taste, feasting on and teasing himself with the scintillating combination. He sucked on the fullest part of her bottom lip, grazing it with his teeth.
The small voice in the back of his head warning him to stop, that kissing her was a mistake, was drowned out by the blood pounding inside his head. Every heartbeat spent tasting her wasn’t enough to satiate the need building in him.
He groaned; the wild, untamed sound wrenched from deep within his chest. Dropping his other hand to her waist, he pulled her up against him.
Annika twisted away from him, her breath coming in small gasps. In the firelight, her lips shone wet from their kiss. Her eyes glowed a pale ice blue, almost silver. “Kalan . . . I can’t . . .”
The waver in her voice drew him back from the edge, checked his desire. Lady’s Breath, he’d never intended to lose control so quickly. He dropped to his knees, his own breath ragged, and gripped his thighs hard to stop himself trembling.
“I didn’t mean to scare you.”
“You didn’t.” Her shudder indicated otherwise. Her head dropped. Guilt dampened his arousal. Her voice fell to a whisper. “I’ve never done that before.”
“What? Kissed?”
“Yes.” She gave a half-shrug before meeting his gaze head on, the obstinate tilt to her chin back. How could such vulnerability and incredible inner strength coexist in this woman? “Human or demon. I didn’t think you’d do it . . .” 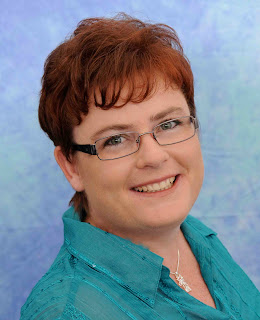 To be in the draw to win a signed copy of Vengeance Born, leave a comment to this question - Overcoming prejudice is one of the themes that dominate the story in Vengeance Born. Can you think of any other book or movie you've really enjoyed reading or watching that deals with this theme? Which one was it and what in it moved you?

Come back next Sunday, when the winner of today's giveaway will be announced -- and a smooch from What Lies Beneath by Andrea Laurence will be posted!
Posted by Helen Lacey