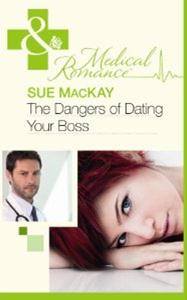 
Today we have a smooch from The Dangers of Dating Your Boss by Sue Mackay, but first ...

Congratulations, Maria! Can you please contact Louisa George via her website and she'll send you a copy of One Month To Become A Mum.

And now for today's Sunday Smooch from The Dangers of Dating Your Boss by Sue Mackay ...

[Lead in - Ruby left Jack three years ago, but now they find they're working together on the rescue helicopter. From the moment they met again it's obvious the attraction that had been between them before is still strong, but now there is a truckload of issues to sort out before they can admit their true feelings. Except it's never that easy.]

Jack's hands slid over Ruby's back. A caressing movement that stole the air out of her lungs, nullified the common sense trying to take hold of her mind. When he wrapped his hands over her shoulders and tipped her slightly backwards she knew he was going to kiss her and she was powerless to stop him. She wanted it. Forget right or wrong. This was Jack and she was finally kissing him. Common sense was highly overrated.
His mouth touched hers; softly, tentatively. Seeking what? A connection from the past? A new beginning? She thrilled as his lips moulded with hers. And when she opened her mouth under his, her tongue tasted him. And Jack went from slow and quiet to fast and hot in an instant. His kiss deepened so quickly Ruby was spinning through space. Her arms gripped hiim tighter for support, trying to keep her firmly in the here and now as she tilted further back to allow Jack better access to her mouth.
At last. She was kissing Jack Forbes again. Memories of other kisses flooded her senses. Nothing over those years had changed. They fitted together. They were two halves that needed their matching piece to be complete. And yet this kiss felt different from every other kiss she'd shared with Jack. Filled with need so long held in abeyance. Filled with promise of new beginnings.
Heat zinged along her veins, dipped through her body, lit the dampened fires of desire she'd been denying since setting eyes on Jack close up yesterday. No other man had ever made her feel so weak. so tight, so warm, so needy, all in an instant. Just by kissing her, Jack turned on every switch her body had.
He walked her backwards up to the wall, his mouth not breaking contact with hers for a moment. Pressed against the wall, Ruby wriggled up onto her toes, all the better to continue kissing him. And as she did, she rubbed against his arousal, turning her heat into a conflagration. They were going to make love. The need, the desire, pulsed between them, hummed in her blood, tasted sweet in Jack's mouth.
Then Jack lifted his head and hurriedly stepped back. Ruby stumbled, steadied herself. "Jack?'
His gaze was dark, deep. Wariness slowly filtered through the desire, cooling it. Caution took over and he stepped further away, taking his warm hands from her shoulder. 'Sorry.'
I have a copy of The Dangers of Your Boss to give away. Leave a comment and go into the draw.
Posted by Sue MacKay

Email ThisBlogThis!Share to TwitterShare to FacebookShare to Pinterest
Labels: sue mackay, Sunday smooch, The Dangers of Dating Your Boss