Sunday Smooch - One Month To Become A Mum


Today we have a smooch from One Month To Become A Mum by Louisa George, but first ...


Congratulations, Kaelee! Can you please contact Andrea Laurence at

and she'll send you a copy of What Lies Beneath.

And now for today's Sunday Smooch from One Month To Become A Mum by Louisa George ... 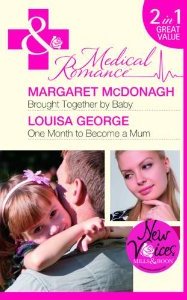 Some things in life are worth waiting for ...

Jessie Price has lost her only chance at motherhood – it’s a constant hurt, until she meets sinfully sexy single dad Dr Luke McKenzie and his gorgeous little girl. Luke’s intoxicating kisses and his daughter’s adoring hugs have Jessie longing for the impossible. But she's a temporary locum, the clock’s ticking – and there’s only a month to make all her wishes come true…

Resting the bag of peas on the drainer she shook her head again. ‘No Luke, we agreed, remember? Friends only.’


‘You’re right.’ He stepped away. ‘Absolutely. I’m sorry. I shouldn’t…’
‘No.’ Jessie took a shallow breath. Then another. Grabbed his wrist as he turned from her.
What the hell?
No matter how much her head said she shouldn’t do this, her body ached for it. Maybe …get him out of her system. A brief kiss then she’d be satiated.
Would she? One kiss could lead to more, and more, and then inevitably he’d see her scars. Then the kiss would definitely end. And any hope. She needed to leave. Now, before it was too late.
But he tipped his head, inches away from her mouth. He smelt of soap and cinnamon, an intoxicating mix. He glanced at her fingers clasping his arm. Smiled. Ran his thumb over her bruised lip. ‘I’ll be gentle.’
The look he gave her was a question, a promise. Another dare. How could she resist?
‘Gentle? Don’t even think about it,’ she groaned.
Her arms curled around his neck. She blinked up at him, her tongue slicked a line along her lips, her breathing came in little gasps as she pulled him closer and found his mouth with hers.
Her lips were ice-cold and she tasted of honeyed wine. He wanted to drink her in, every beautiful drop. Very gently he traced butterfly kisses around her mouth, slowly kissing along the line of bruising.
It wasn’t enough. He wanted more of her.
To hell with treading carefully, he wanted to rush in and capture the whole deal. He wanted Jess and her crazy whirlwind of fun and fragility. He wanted her in his bed, by his side. He wanted her unlike anything he’d ever wanted before.
He inhaled her flowery scent, drunk on the heady aroma.
What did he want? For her to stay? That was so far off both their radars. But right now it seemed possible. He couldn’t think straight with her here. He wanted this. Her smell, her soft body in his arms. This kiss.
Yes, that’s what he wanted. More than that he was lost.
‘Jess,’ he murmured as he unpinned her hair. It fell in tendrils around her shoulders and he buried his hands in her blonde curls as he kissed her, suffusing her lips with his heat.
She deepened the kiss further, sliding her tongue into his mouth, filling him with spasms of heat and desire. Her tight body pressed against his, beneath her dress he felt the swell of her breasts, the curve of her hips, and was lost with the power of his need for her.

To be in the draw to win a signed copy of One Month To Become A Mum, leave a comment and Louisa will draw one lucky winner!


Come back next Sunday, when the winner of today's giveaway will be announced -- and a smooch from The Dangers Of Dating Your Boss by Sue Mackay will be posted!
Posted by Helen Lacey