Today we have a smooch from Sister Pact by Ali Ahearn and Ros Baxter, but first ...

the winner of last week's Sunday Smooch Giveaway is -- Shelley B!

Congratulations, Shelley! Can you please contact Sue at lsmackay (at) ts (dot) co (dot) nz and she'll send you a copy of The Dangers of Dating Your Boss.

And now for today's Sunday Smooch from Sister Pact by Ali Ahearn (aka Amy Andrews) and Ros Baxter... 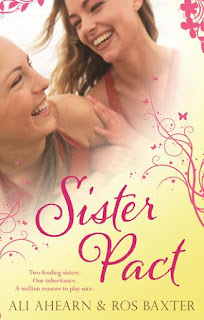 Two very different sisters. Once inseparable, they have long been estranged after an unimaginable betrayal.

Organised and uptight Frances married the only man she’d ever slept with. But no-one ever told her that seven years later she’d be having sexual fantasies about everyone from the pizza delivery guy to Denis Thatcher.

Scatterbrained animal-lover Joni never knew she was so attached to her kneecaps until she thought she might have to say goodbye to them forever.

After their beloved grandmother -  a game show addict – dies, they discover that they have each been left one million pounds in her will. The kicker is they can only inherit if they participate as a team in a gruelling reality TV program, Endurance Island.

[Set up: Joni and Frances have been sent on a jungle trek challenge with the Irish cousins. They are hopelessly lost until Frances stumbles across Nick, the type of guy who can shear a sheep, build a shelter, climb a bramble infested tower and slay a dragon all before breakfast.  There is chemistry!]

Frances blushed again and, before she knew, it he was standing behind her like he had on the beach, his arms out in front, enveloping her as he talked her through the salient points, twisting the dial and rotating them both around as he spoke.
She could smell Nick’s earthy male aroma and feel the light press of his lips on her hair as he spoke. The buzz returned with a vengeance and Frances shut her eyes as it rippled everywhere.
‘And that’s pretty much it,’ Nick said. ‘Simple, isn’t it?’
Frances opened her eyes. ‘Clear as mud. Right up there with reverse parking and reading maps,’ she murmured.
Nick thought for a minute. ‘Okay, try this.’ He turned Frances back towards the stream and told her to look up. ‘See the sun?’
‘Yes, Nick. I’m directionally challenged, not blind.’
‘Except when it comes to men.’
Frances paused. ‘I think I’m seeing the light.’
‘Hallelujah,’ he murmured.
‘Of course, it could just be the sun,’ Frances quipped as his lips created havoc near her ear.
Nick chuckled. ‘And what do you know about the sun?’
That it had kissed his skin to perfection? She cleared her throat. ‘It rises in the east?’
‘And?’ he asked patiently.
‘Sets in the west?’
‘Bingo.’
Frances waited for him to elaborate. ‘Is this some kind of Australian riddle?’
Nick sighed. ‘The camp is on the western tip of the island.’ He pointed to the sky. ‘Follow the sun. It’ll take you straight there.’
Frances looked at him skeptically. ‘Really? Just like that?’
‘Really.’
Frances felt twenty years younger as the simplicity of Nick’s advice filtered slowly into her mind.
She beamed. ‘Thank you, Nick. Thank you, thank you, thank you,’ she said, grinning like an idiot, shifting from foot to foot, and then, finally, succumbing to the urge to hug him.
Nick grinned back. ‘It’s not rocket surgery.’
Frances pulled away slightly. ‘Maybe not, but you’re a lifesaver anyway.’
She could feel the heat coming off him as his hands tightened around her waist. Their bodies were pressed together from the hips down and she was mesmerised by the blue of his eyes.
‘So, are you going to leave that husband of yours?’ he asked, his gaze again falling to her mouth.
She swallowed. ‘Already have.’
‘Good,’ he murmured, backing her up until she bumped gently against the hard trunk of a nearby tree.
‘Then you won’t mind me doing this.’
His head swooped and not even the bite of the bark registered as the buzz exploded inside her, transforming her entire body into a giant erogenous zone. A quivering, whimpering erogenous zone. His lips took control and Frances hung on for dear life, sucking up every smoky nuance. The orgasm that had threatened earlier hovered closer.
His tongue pushed into her mouth.
Close. So close. Just a few more seconds …
‘Nick? Nick?’
They broke apart like they were fifteen-year-olds, instead of responsible adults. Frances whimpered and reached for the trunk to stop from falling.
‘Nick? Where the farking hell are ya?’ The voice was coming closer.
They stared at each other, their harsh breath the only other noise in the suddenly still jungle. The distinct screech in Cheryl’s voice even managed to frighten the insects into silence.
‘Coming, Cheryl,’ Nick called, his gaze not leaving Frances’s. ‘Are you okay?’ he whispered. Frances nodded. She probably wouldn’t drop dead from orgasm interruptus.
Probably.
Nick ran his thumb over the plump moistness of her mouth and pointed to the sun. ‘Go.’
Frances nodded, brushing past him, stopping only to pick up the water bottles before scurrying back in the direction she’d come.
Back to sanity.
If an addict, an ex-addict and a maudlin wandering minstrel could be classed as sane. 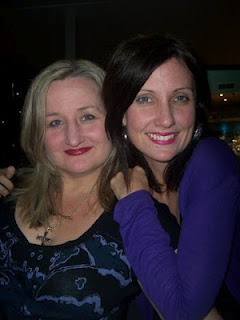 Sister Pact will be released in Australia on May 1 and you'll find it in all good bookshops. If you'd like the eBook version, you can also find it at Amazon or at you can get a paper copy at Booktopia.

To be in the draw to win a signed copy of Sister Pact, just leave a comment. Ali and Ros are particularly interested to hear if there's any sibling rivalry in your family!

Come back next Sunday, when the winner of today's giveaway will be announced -- and a smooch from First Time Lucky by Natalie Anderson will be posted!
Posted by Rachel Bailey