Ever noticed how life sometimes hands you a really sweet piece of synchronicity?
Back in 2008 I wrote my first category length romance novel—my second only novel of any kind. I called it The Player and was extra-fond of it the way people are extra-fond of their first child. But while The Player was working the competition circuit (and with me brimming with fondness for category romance) I decided to try another, targeting a different line. To see where I fit most naturally.
The Romance Writers of Australia were running an event called “50K in 30 Days” during June 2008 and the simplicity of that really appealed to the fast-writer inside me.
A whole book, in a month. I could do that. And if I couldn’t well then it only cost me a month finding out.
So I spent the last days of May scribbling down a loose plot and I wrote a book in June 2008. Page 1 to The End. And I liked this one, too, though for different reasons.

I also liked the process of writing alone but together. There were twenty-or-so of us that year all beavering away diligently in our respective garrets but all coming together online to commiserate, celebrate and motivate. The very best of both worlds.

Right in the middle of June, The Player won a competition and a senior editor for M&B in requested the full manuscript. Distracted by my exciting new story—I think I may even have grumbled at the interruption to my fabulous month of intensive writing, ungrateful cow that I was—I bundled up the full and sent it off to London with very little fanfare (or finesse). And I forgot about it and went back to my book-in-a-month.
To the siren-song of the new story.


On June 30 I sat back in my chair, flexed my tendonitis-riddled fingers and smiled at 52,000 words of new story. Even partially edited.
And then my eyes raised to the horizon and a new idea that had bubbled forth half-way through the last book. I put my thirty-day book in the metaphorical drawer and kind of forgot about it. It had served its purpose.  Category romance and I got on very well.
A few months later I was contacted by that London editor who had requested The Player back in June and whose to-be-read pile had eventually whittled down to it. She wanted to talk revisions and she wanted to read anything else I had.
(The drawer! Quickly, the drawer!) 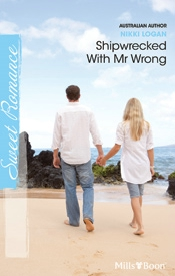 I hauled my thirty-day story out, botoxed it and put it in heels and shoved it out onto the streets of unexpected opportunity. And damn me if it didn’t sell!
So the editor who had asked in June to see my first novel ended up buying another story that I wrote…in June. She offered me a contract for three more books…the following June. And, just to round off the synchronicity, that first story releases in as Shipwrecked with Mr Wrong… this June!


Cue spooky music.
I’m doing ‘50K in 30 Days’ again this year because—experience has shown—June is kind to me.  I’m not as free to simply immerse in a new book this year because I have another book to write at the same time and a conference to go to, but I still feel that same pioneer spirit that goes with starting something new.  (A paranormal, not that you asked). But it has June written all over it, don’t you think?
And lots of other good things are connected to June.  I get paid in June. The rain starts in June. This guy is Mr June.--->
So if you’re a writer and want the company, camaraderie and compulsion of a month-long writing challenge… think about joining me in the 2011 RWA ‘50K in 30 Days’. Please say hi. I don’t bite.
Oh yeah… it’s in June.
(Contact Julia.c.burns@gmail.com to take part)
Posted by Nikki Logan