Today we have a smooch from The Man Behind the Badge by Sharon Archer, but first ...


Congratulations, Ju! Can you please contact Anna Campbell at

and she'll send you a copy of Midnight's Wild Passion.

And now for today's Sunday Smooch from The Man Behind the Badge by Sharon Archer... 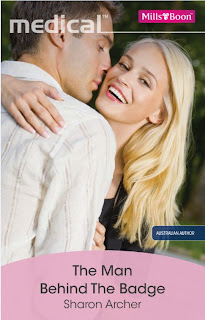 However hard city-girl and new-doc-in-town Kayla Morgan tries, she can’t resist being impressed by the law-enforcing Tom Jamieson! But taking a bullet in the line of duty has made cop Tom rethink his work hard, party harder lifestyle – will he ever let Kayla see the real man behind the badge?

[Set-up: Kayla is the doctor-on-duty at a High Country camp draft weekend. Everything about the event is a first for her, including spending the night in a tent. Tom's family has a traditional barbecue on the Saturday night and Kayla has agreed to go. As far as she's concerned, regardless of how attracted she is to Tom, the dinner is not a date!

Tom walks her back to her tent afterwards and this is their first kiss...] 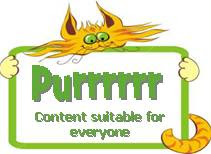 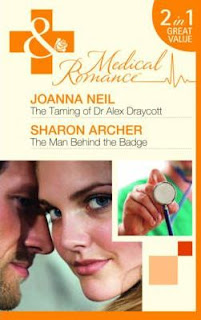 pped closer to her, felt the heat of her body reaching out to his. “I’m going to step out of line.”

She looked up at him. He felt the small shudder that shook her. “Are you?”

“Yes.” He ran his finger tips up her arm. “What are you going to do about it?”

Lifting his free hand slowly, he cupped her face, feeling the soft skin against his palm, the cool silk of her hair across his fingers. She tilted her head, offering her mouth to him.

He could feel the tension in her, watched as her lips parted slightly and she bit down on her bottom lip for a tiny second then released it so it plumped back up.

He leaned forward slowly, gave her time to stop him. Her eyelids drifted shut. Over the thunder of his heart, he heard her quick shuddering breath.

And then his lips touched hers, pressing gently and everything else became irrelevant. The sensation was electric, exquisite. He rubbed his mouth across hers slowly, backwards and forwards. The sweet softness gave under the pressure, inviting, making him want more than he should on a first kiss.

Eyes shut, he savoured the explosion of taste. Delicious. Exciting.

Her fingers wrap around his wrist. Flexing once, twice, as though she was debating whether to tug his hand away. But in the end she just held him as though anchoring herself.

He drew her bottom lip into his mouth with a gentle suction and ran his tongue over the succulent flesh. Then reluctantly let it go.

Pulling back slowly, he struggled to surface. Kayla didn’t move for a long moment, her mouth stayed offered up to his, swollen, inviting. Unbearably tempting.

Her eyes opened. He heard the shaky breath she sucked in, saw her breasts rise and fall. He clenched his jaw with the effort of not plunging back to take more. He wanted to bury his fingers deep in her hair, use both hands so he could tip her head and take their kiss to a whole new level. Pull her under into the tide of excitement that was raging through him, threatening to sweep him away.

But he had to resist. He wasn’t in this for a quick tumble. He wanted more, wanted it all. This was for keeps. The thought crystallised. She was what he wanted for his future.

Reining in his lust, he pressed a kiss to each corner of her mouth and stepped back.

“Let’s get you into your tent.” His voice was hoarse.

“M-my tent?” She sounded as dazed as he felt.

“Yeah. While I still remember my promise to behave,” he muttered as he bent to unzip the door. His fingers fumbled with the tab but after a moment he had it open. “There you go.”

“Th-thanks.” She stepped into the tent. “Goodnight, Tom.”

With a sense of desperation, he quickly zipped the door closed before he could disgrace himself by begging. 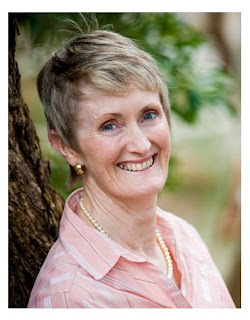 To be in the draw to win a signed copy, simply answer this question!

Do you remember your first kiss?

Come back next Sunday, when the winner of today's giveaway will be announced -- and a smooch from Prince of Scandal by Harlequin author Annie West will be posted!
Posted by Emily May

Email ThisBlogThis!Share to TwitterShare to FacebookShare to Pinterest
Labels: sharon archer, Sunday smooch, The Man Behind The Badge