Today we have a smooch from Hunter's Surrender by Harlequin author Anna Hackett, but first ...

the winner of last week's Sunday Smooch Giveaway is -- Zoe!

and she'll send you a signed copy of The Bought-And-Paid-For Wife, plus your choice of one of her Special Releases or Bestseller Collection re-releases. 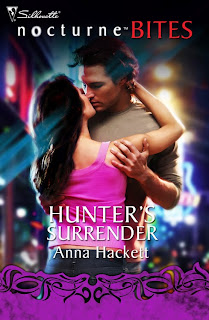 Vampire hunter Rand Wilder hated vampires – even if they were as beautiful and alluring as vampire princess Dominique Valois. For years he fought the beings who had killed his father, resisting their dangerous sensuality. Yet even Rand was tempted by the intoxicating Dominique and her shocking offer: to hurt the vampire court by taking her virginity….

A desperate need to ruin her reputation had forced Dominique to seek out the hunter known as The Darkness. But she hadn’t expected Rand to be so captivating and compassionate…. Soon a very different sort of need drove her desire to take Rand to her bed. And with Dominique’s survival depending on it, she would have to use all her skills of seduction to make this strong hunter surrender to passion…. 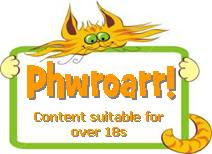 [Set-up: Vampire Dominique has vampire hunter Rand Wilder held in her thrall while she makes a very indecent proposal…and uses all her wiles to convince him to accept...]

Her hand moved across his chest, a nail scraping over his nipple. He swallowed a groan. Her hand inched lower and then even lower.

“I do believe, Monsieur Wilder, that you are lying again.” Her hand cupped his rock hard erection through his jeans.

Jesus. Pure electricity flooded through him, making his skin feel too tight and his muscles threaten to turn liquid.

She stroked him and savage hunger sang through his system, screaming for him to touch her, take her.

“Don’t you want me?” Her husky murmur carried so many forbidden promises.

Her hand continued its torture, stroking the hard length of him. Her other hand curled around his neck and brought his head down. She was tall, but he was taller and he felt her go up on her toes to press her crimson lips to his.

That luscious mouth moved like a whisper over his, small nipping bites that teased, barely giving him a taste of her.

But what grabbed at him was the trace of hesitancy. Like she hadn’t kissed many men.

The thought fired through him. Emotions—hot, rich emotions—stormed through him and riding the wave was the strongest desire he’d felt.

With Dominique caught up in her seduction, Rand broke through her thrall. His hands gripped her hips, his fingers sinking into leather-slicked skin. He yanked her to him and took control of the kiss.

He plunged his tongue into her warm mouth and swallowed her groan. She tasted of fresh and sweet, cool spring water and natural honey. She tasted of innocence and desire, a combination that stole his sense. He dragged that taste inside him.

The force of his kiss bent her head back, but Dominique returned everything he gave. Her hand slid into his hair, clenching there. Rand slid one of his hands between them and pressed her other hand against the bulge in his jeans, crushing those elegant fingers against his heated body.

Right now, Rand didn’t care who she was, or what she was. Right now, Dominique was a light in the darkness his life had become. 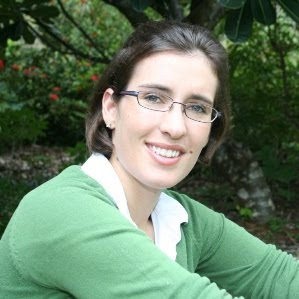 Hunter's Surrender is currently available from all good e-bookstores. To be in the draw to win a free download, tell Anna which you'd rather be if you had the choice: a vampire, or a vampire hunter!


Come back next Sunday, when the winner of today's giveaway will be announced -- and a smooch from Midnight's Wild Passion by Anna Campbell will be posted!
Posted by Emily May