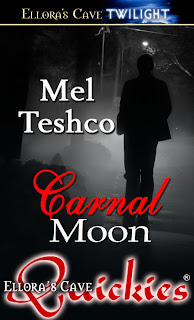 The winner of Carnal Moon or any backlist title is Cass Green! Let me know which book you'd like Cass and I'll send it to you ASAP. Happy reading!!

****
What I'm reading: Poison Kissed by Erica Hayes
What I'm listening to: Planets by Shortstack
What I'm watching: The Block
What's making me smile: Release day for Carnal Moon!

A Werewolf or Lycanthrope (often shortened to Lycan) is a wolf-like paranormal/mythical creature, which is said to have existed throughout much of history, most notably Europe. A werewolf is a person with the ability to shapeshift into said wolf-like creature, a transformation that most often occurs with the appearance of the full moon.
They are noted for their superhuman strength and senses, and in many novels and hollywood movies, often for their indiscriminate killings.
It is said that drinking rainwater from a werewolf's footprint can pass the 'affliction' onto an ordinary mortal, other beliefs state sleeping outside on certain summer nights with the full moon shining directly on the face, will bring on lycanthrope. Of course, in most fiction, generally a non-fatal bite or deep scratch wound is all that is needed to bring about the change.
Unlike vampires, religious artifacts don't repel or kill a werewolf. A silver bullet is said to kill a werewolf, and in some legends, wolfsbane is an effective deterrant.
Maybe a bolted door with shuttered windows would do the trick??

Has anyone read any great werewolf books lately? What worldbuilding rules did the author set for the characters?
I'm giving a copy of CARNAL MOON or any one of my backlist e-books to one commentator =)
Posted by Mel Teshco