After attending a fabulous workshop by Rowena Cory Daniells at last year's RWAus conference, I'm thrilled to have her here as a special guest at the Lovecats blog!

Welcome Rowena! First off, congratulations on your upcoming trilogy release: The Kings Bastard, The Uncrowned King & The Usurper.

Thanks Mel. To be honest, I edited all three books ( 3 levels of edits and each book is over 100K) in the first few months of this year and I’m just feeling relieved it is over. I’m sure the excitement will catch up with me.

Each book of ‘The Chronicles of King Rolen’s Kin’, are released a month apart—great news for us readers, but how are you feeling (g)?

LOL. I just answered your question. At the same time I was teaching 3 subjects at college, renovating my house and writing a new book. Why did I do this to myself?

How did the concept come about?

The books have been growing for ages now. I set out to write the kind of book that you curl up with on a Saturday afternoon after a hard week at work. The kind of book that you reward yourself with. So it is a traditional fantasy, in that it is a medieval setting about the struggle for the throne. But then I had fun playing with the tropes of the genre. Instead of the younger twin wanting to usurp his twin the heir, he’s happy to be the spare heir, that sort of thing.

World building is obviously integral to your fantasy trilogy. Can you tell us how you developed your character’s playground?

It is funny what inspires us and what stays with us. When I was about 10 my family went to play tennis at a set of courts in the back blocks of the Gold Coast. This was in the days when the holiday strip was not as gaudy and glitzy as it is now. My parents loved to play tennis and they told me to watch my little brothers, 8 and 5 and my sister 3. Behind the courts was a stretch of land backing onto a creek. T 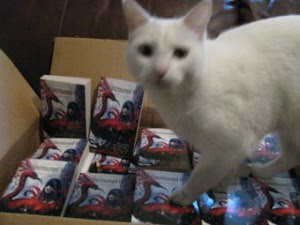 here were white sand dunes, scrubby trees and it was the perfect place for us to play (in those far off days when kids ran wild most of the time).

As the eldest I was used to organising the games and I always saw myself as a sort of hero character so we'd play these long involved games with my younger siblings as my army, following orders, fighting great battles against enemy foes.

While running down one high white sand hill through the hollow into the next we left my little sister behind. Halfway up the next dune I turned around to find she'd run through the deepest part of the hollow and the sand, which appeared to be solid, had given way. She was knee deep in some sort of sticky sand-clay mix and couldn't get out. Having seen plenty of Tarzan movies, I immediately thought of quicksand.

A real emergency! I told my brothers to stay back, afraid that they'd get trapped too, and edged forward. The sand's surface broke up under my feet. It was cold and smooth and wet, and I didn't know what was under there. My eight year-old brother (who was almost as big as me) came and grabbed my arm to pull me out if I got stuck. I managed to grab our little sister's arm and hauled her out of the sticky sand-clay which did not give her up easily. Meanwhile the five year-old brother danced on the edge of the danger zone in desperate to help and likely to get himself into trouble.

End of story, she was fine and we kept on playing. I don't think we even told our parents about it, because by the time they finished playing tennis our game had moved on and that was old news. But I will always remember that sense of something under the ground opening up and proving dangerous.

In King Rolen's Kin power seeps up from the land's heart, infecting people and animals. Only those trained to contain this power go near Affinity Seeps. So a childhood adventure was inspiration for something in my book many years later. These days I don't order my younger brothers and sister about to play out my great battles, I have a cast of characters and they play out the battles in my books.

You’ve also had some speculative fiction work published, one of which won World Best Fantasy. Enquiring minds would love to know all about it?

Mel, I had a story in Dreaming Downunder, an anthology that won World Best Fantasy. So my story (hopefully) contributed in a small way to that win.

You’ve studied martial arts and the art of the samurai sword. Have you used this knowledge in any of your story telling?

I definitely have used my practical knowledge of martial arts in fight scenes. I’ve also done heaps of research into great military leaders, their battle strategies and what makes men willing to die for a leader. It is all part of building a believable character.

You have six children and have served on various writer committees. I’m guessing you are super organised! What is your writing routine?

Gah! My writing routine has been hopeless since I became an associate lecturer. I used to get up, get everyone off to school and work, then write with total concentration. Now I’m stealing every spare moment I can. The other night I couldn’t sleep, so I got up at 3am and wrote through until 6am when I had to start the morning routine. But you can’t do that too often.

And finally, if you could impart just one gem of wisdom for aspiring writers, what would it be?

Read widely in your genre and associated genres. Read the books that are shortlisted and win awards to see the direction your genre is taking. Read real life accounts for authenticity so you can bring something fresh to your genre. Join a writing group where the other members are as passionate about developing the craft of writing as you are.

And lastly, Never Give Up, Never Surrender! (Spec Fic fans will get the Galaxy Quest movie reference). More than one tip, I know but all are important.

Thanks so much Rowena, I can’t wait to read The King’s Bastard, out this month!

***Rowena has very kindly offered to give away 2 of her books to two lucky commentators!***

And the question is: In the King Rolen’s King trilogy there are places where power seeps up from the earth’s heart. What are these called? 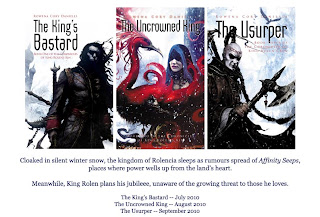