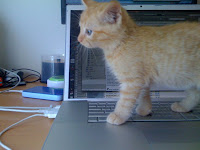 Name - Yeti
Abode - Bribie Island
Human Slaves- Tina, Shaun, Kyle (13) and Barry (11)
Likes - running sideways like a spider. Clawing everything and anything is exciting to me. Curling up next to the computer when his slave is typing. 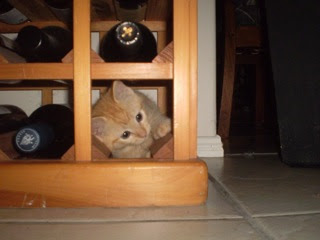 Dislikes - his reflection in the window. I meow at it, hiss and spits and it doesn't go away even when I puff up like an orange bottlebrush.
Ambition - to be big and fat like his adopted brothers Binx and Baggie.
Sociable or Aloof - Sociable to the point of being a pain, forever talking (much like his human slave).
Night Owl or Early Bird - Neither, just fits in with whatever the humans are doing. Making sure I'm real easy to live with at the moment, until I am settled in...
Favourite Pastime -Attacking electrical cords!
Favourite Toy - walking on my slaves keyboard and my little yellow mouse with a few feathers as its tail. 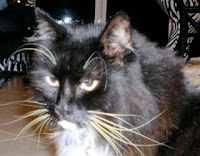 Best Friend - At present would have to be Binx, because he lets me chase his tail, jump on him, and sleep by him without attacking me. But I really am trying hard to be friends with Baggie.
What do you like to sharpen your claws on - everything at the momen 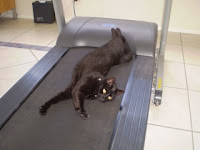 t, waiting for an internet
ordered scratch post to arrive. Hurry up postman!