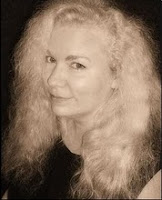 I'd like to introduce fellow Ellora's Cave writer, and all round wonderful lady, Laurann Dohner. She writes fan yourself *hot* cyborgs and alien men, and is a big favourite with many Ellora's Cave readers.

She told me a 'real' story recently about a tornado she lived through, and I was so intrigued I asked her to share the story with us at Lovecats.

Here's her story, and some of her lovely eye candy covers, along with her most recent blurb.

My best friend and I were visiting a relative of hers in another state. We’d driven her small sports car and were on our way back home traveling down a lonely stretch of highway. It was overcast and we were hearing reports about tornados touching down on the radio. Shannon was excited because she’d never seen one. I was driving and to my left a while later I saw a funnel in the distance.

“There you go.” I let go of the wheel to point it out to her.

She was nearly bouncing in her seat, that excited, and I had to laugh because who gets excited over a funnel? Obviously my best pal. Within five minutes I was feeling apprehension since more of them were springing up around us and then I looked in the rearview mirror to see a bigger one on the road behind us. It seemed to be using the road as a map to come right at us so I stomped on the gas hoping to outrun

it. Shannon’s joy had turned to terror, understanding the danger we were in.

Ahead of us we saw a bridge and other cars were parked under it blocking the road, the only place they could find shelter from these baby funnels that were dropping from the sky so I parked the car and realized the tornado was still heading for us. I shouted at Shannon to get out of the car, looked up to see that people were already crowded up in the rafters so I told her to grab her purse. I got her to the round supports that held up the bridge. I showed her that I was wrapping my wrists around my purse straps, my purse on the other side of the beam, and in effect lashing myself to it. I saw pure panic in her brown eyes and yelled (the sound was bad at this point) to do the same. In seconds the tornado reached us, wind howled through the underpass and my hair blinded me. I was pulled away from the beam and it literally sucked me off my feet. I couldn’t see

anything because the wind was intense, the noise so loud I couldn’t even hear Shannon or myself screaming, and my wrists hurt where the straps of my purse dug in painfully. In what was probably ten to fifteen seconds it was over even though it seemed like minutes.

My shoes and the hairpins that held my hair in a bun had been sucked right from my body. I turned my head to see three cars were just gone, including Shannon’s. Shannon was crying, staring at me, and deathly pale. We had some mild bruising and scratches from debris but otherwise we were fine.

They found Shannon’s car a few miles away in pieces where it had slammed into the ground. Her uncle had to come collect us from the police station and drive us home. I asked Shannon while we were waiting for him to arrive if she ever wanted to see another Tornado in her life.

She just shook her head, still in shock, and said. “I know what carpet feels like when it gets vacuumed.”

All Rena wanted was to steal back a spaceship and earn enough money to buy her freedom from her travesty of a life. Her mission to recover stolen property from pirates backfired and she became a possession w

hen she encountered cyborgs instead. Now, one of them will own her. Rena is a survivor…and she wants the very tall, big, brutally sexy cyborg who doesn’t like to share anything that belongs to him.

Steel is beyond irritated when he is maneuvered into ownership of a fragile human female. She’s not nearly big enough to handle his size or strength, yet she’s determined to get him into bed—into her. Steel realizes just what this little female is capable of when he awakens, chained to his bed, with her riding his very turned-on body. For a man who prides himself on his unyielding control, Steel soon finds Rena stripping him of it an inch at a time.