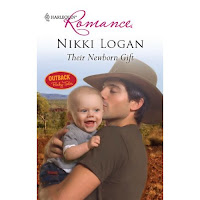 I’ve been amazed and amused at the reactions of various people to the cover of my June release – Their Newborn Gift. This story is the final of a three-book continuity called “Outback Baby Tales” (April, May, June) with fellow Aussie authors Melissa James and Michelle Douglas (One Small Miracle and The Cattleman, the Baby and Me respectively.)
I was so excited by the potential of a series set in WA’s red Kimberley and I flooded the art department with fantastic images of emerald green billabongs set into blood-red rocks, wild brumbies and aussie homesteads. But then Melissa and Michelle's covers came through and were indoor/nursery images with no visible signs of Aussieness and, although they were lovely, I started to get nervous. So when I got my cover and saw red dirt I was relieved. Then I saw the hot cowboy with his Akubra and was even more pleased (plus he’s virtually the spitting image of the model I used for my hero, Reilly). And then I saw that little baby and its fat bottom and chubby little fingers and my heart just melted. For me this cover has what I'd be looking for if I was standing in Walmart or Asda or KMart – outback...cowboy...baby. The only thing that would have made it more like what I had in my head was a brumbie wandering through the back of shot.
This is not to say that everyone has been as enamored as I. Someone suggested the baby has a ‘freakishly wide mouth’, someone else asked why it was set ‘on Mars’ (Kimberley, people…Kimberley!) or that he’s 'the best-groomed cowboy since Brokeback Mountain'. One comedian asked me if the baby was the heroine.
You guys crack me up... No, really...
Between chuckles it did reinforce for me the complicated issue of cover design and how to set a tone that will ‘sell’ to the maximum number of reader personalities in a marketplace. It must be super hard given how many diverse tastes and preferences are out there. I would love to hang out in the art department and watch how covers are put together (from concept to final render). While I have no doubt that they whiz them together proficiently (I'm sure they have a mountain to get through each week) I know from a decade in the advertising industry that nothing is left to chance and that every element is there for a reason. I’d like to know those reasons.
Anyhoo…all of this made me think about covers that really ‘worked’ for me which sold me a new author (or even sub-genre)… so I turned to my bookcase (real and virtual) to see what was there that stood out.

JR Ward – Dark Lover (UK cover) I love the vulnerability of the heroine, leaning into her hero, wet, bedraggled. It’s sexy and gentle at the same time. It’s stock-photo but it works. And I love that you can’t make out much of the hero’s face, which allowed me to picture Wrath my own way… Again, this cover was the reason I picked up my first JR Ward… the rest is history.

Kate Hewitt – The Italian’s Chosen Wife – I’m not a crashing fan of the ‘clinch’ and (for a Sexy/Presents/Modern) this one was so tasteful but sexy. Classy but brazen (something about busts, bare feet and buttonless shirts). Would love to know how loyal Presents readers responded to it. Sadly in UK and US the beautiful setting was all but obliterated by the standardised cover stencil...

Deanna Raybourn - Silent in the Grave This cover jumped out at me because it spoke of a non-traditional romance with a female lead and a historical, London setting. The colours and tones spoke of elegance and restraint (look, no clinch!) which suited the story very well. Another author I now have on my 'must buy' list thanks to picking up one randomly in the bookstore based on the cover.

Tony Park - Silent Predator I include this because Park's work has been called romance for blokes, but in fact his books are as well read by women as by men. This cover leapt off the shelf (no pun intended) because of the stunning colour of the cover and the romance of the image. Africa. Leopard. Dawn. Or maybe twilight. It's hard to tell. But I took it home and then went back and bought all of Tony's backlist.
By the way, yes, I pick wine and Melbourne Cup horses the same way. Good label or nice looking horse. So far it hasn't failed me! What do you think? What do you like in a cover? Can you think of any that really stood out for you? Do any of these covers do it for you or are you thinking 'meh...'.
Posted by Nikki Logan