Today we have a smooch from but first ...... the winner of last week's Sunday Smooch Giveaway is Jillian Jones!

Can you please contact Rachel Bailey at Rachel (at) rachelbailey (dot) com to receive your prize.


And now for today's Sunday Smooch from Playing House. 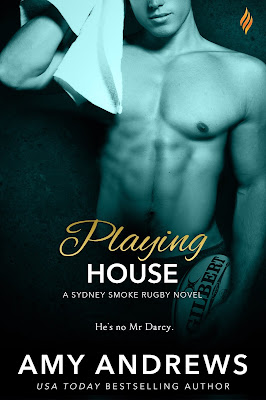 Eleanor is content with her boring life—mostly. She’s even fine being the quirky sister in a bevy of beauties. So imagine her surprise when one of her brother’s Sydney Smoke mates hits on her at an engagement party. Her. The weird sister, who wears vintage dresses and prefers her books to parties.
Bodie is shocked the next morning to find the soft, sexy virgin who seduced him with corsets is his best friend’s little sister. If he could kick his own ass, he would. And two months later, she’s got an even bigger surprise for him. Now he needs to convince the corset-loving wallflower that he loves her uniqueness if they’ve got a chance at forever.
He always did love a challenge…

Eleanor is waiting in the hotel room for Bodie to join her. Tonight's the night she's losing it and she's a tad nervous!


Eleanor jumped at the knock. Her pulse spiked and the muscles of her neck contracted. Bodie had assured her he’d come, but here he was, on the other side of the door, and suddenly she was overwhelmed by the thought this was really happening.
It had been exactly three minutes since she’d let herself into his room. The entire trip upstairs, she’d been convinced she was going to run into somebody she knew and be delayed. A lot of locals had stayed in town for the night after the country/city match to celebrate their local boy’s impending nuptials.
Which meant a lot of potential for gossip.
Thankfully, the staircase had been empty, as had the long corridor to the guest rooms. Now, all she had to do was go through with it. God…could she?
Yes. She could.
A second knock accelerated her pulse, and her gaze darted to the door a half-dozen steps away. She was going to have sex. Lose her virginity. Be deflowered.
She wished she’d had some more time to think about how it might go down, but all she’d had time for was snapping on the beside lamp, stripping off her clothes and climbing into the white, hotel-supplied bathrobe she’d found hanging in the closet.
Just in case he thought she was actually here to talk about the occult practices of nineteenth century England.
Plus, the corset and bloomers she was wearing beneath her dress tended to slow down the disrobing process, and she didn’t want that. It was hard to believe that a guy like Bodie was even interested, especially after prattling on about hypnotising lions, so she didn’t want to make it any more difficult to do the deed.
A third knock. Eep! Was she actually doing this? A quiet, “Eleanor?” galvanized her out of her inertia.
Yes she was!
Without giving herself time to have a panic attack or chicken out, she practically tripped over her own toes getting to the door. She must have looked a flustered wreck as she yanked it open, her pulse in her neck pounding madly, but he didn’t seem to notice as he pressed one big shoulder into the door frame and his gaze took a slow tour of her body.
It lingered where the gown crisscrossed the deep V of her cleavage before lifting to her face. “I wasn’t sure you were going to open the door.”
His voice tumbled over her smooth as water over river stones and dear God, the man smelled good. He towered over her as he lounged lazily in the doorframe. His gaze dropped to the rise of her breasts then back again. “I see you slipped into something more comfortable?”
Eleanor’s cheeks heated, and her heart raced. Her instinct was to apologise for being so…forward. But damn it, she hadn’t come here to play Scrabble or admire the recent refurbishment to the accommodations. This was operation losing it.
She drew in a shaky breath. “Yes.”
He smiled. “May I come in?
Eleanor’s knees wobbled at the request. This was his room, and she was clearly naked beneath the gown, but the fact that he was asking her permission to enter hit her in all her nineteenth-century feels.
Bodie may have been an elite rugby player, but the man had manners. And manners made Eleanor swoon like crazy.
If he wasn’t careful, she’d fall in love with him.
She grabbed him by the tie and yanked him inside.
He didn’t need any more encouragement, and Eleanor vaguely heard the door clicking shut as the hardness of his body smooshed up against the softness of hers. She pushed up on her tippy toes, seeking his mouth, and he met her halfway.
She moaned at the first touch of his lips, uncaring how much of a rookie she sounded. She was electrified by the feel of him and intoxicated by his taste and smell. His whiskers prickled and teased and she moaned again, her hands grabbing hold of his biceps as the earth tilted on its axis.
“Christ.” He pulled away, his chest heaving as he stared down at her, his inky gaze satisfyingly bewildered. “You taste so good. I want to feast on you all night.”
Eleanor barely had time to register the feral lust turning his looks from preppy to predatory before his mouth was back on hers, hot and hard. He hauled her up his body, his hands gripping the backs of her thighs, lifting her feet off the ground, urging her legs apart.
Her gown gaped below the tie as her ankles locked tight around his waist, and Eleanor clung to him, oblivious of all else but him. Sucking in his taste and his scent, the rough chug of his breath and the deep rumble of his groan. Nothing mattered but the sweet plunder of his mouth, the heat of his belly pressed into the soft flesh of her inner thighs and the hardness of muscles beneath his skin.
She didn’t register him moving, his long sure strides efficiently eating up the distance between the door and the bed without tripping or missing a step despite having a fully grown woman wrapped around him. She didn’t even register falling or the soft embrace of the mattress as they landed. Or the fact her ankles stayed locked tight.
She did register the delicious weight of his body, the way his hips settled into the cradle of hers and the steel of his erection at the bare juncture of her thighs.
Oh yeah baby. Her vagina was all over that. 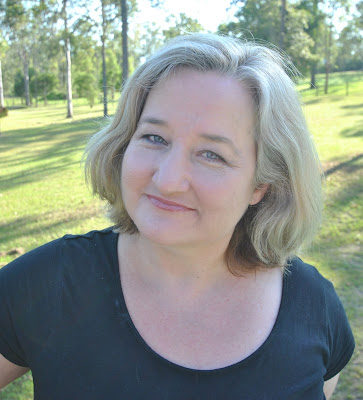 The footy season is about to start again for the year. For a chance to win an electronic copy of Playing House (must have an Amazon account) tell me, are you a footy (of any code) fan and who's your team?