"The days are long, but the years are short." UGH. I cannot tell you how much I came to resent that phrase when I had little kids. The first time I heard it was out of the mouth of a well-intentioned stranger in a supermarket. My then two year old had thrown himself to the linoleum floor of Woolworths in a fit of pique because I wouldn't buy him a Kinder Surprise, and my six month old was stuck in a loop of pushing her dummy from her mouth, spitting it to the bottom of the apple cart, and wailing until I retrieved it.

I wanted to throw myself onto the ground alongside my son. The last thing I needed was to be given a platitude!

I love my children to bits, and I am so grateful - really, grateful beyond words - to have been able to have two healthy babies (particularly when many diabetics struggle to conceive and deliver.) Whilst being mindful of my good-fortune, I have to say, there have been times along this mummy-hood journey that have caused me to doubt my temperament to parent. Before I had children, I thought I would be such a relaxed mum, a fun mum! I swore I'd never be one of those screechy mummies who snapped at children in the supermarket or on the street. Or at all, come to think of it! I would never shout! I would only ever use a calm voice, and we would sing songs and read books, and do craft (because I would have endless energy to wipe paint from fingers and dust glitter from toes!). And there'd be so much laughter, all the time, except when they were sleeping, because they would sleep hours and hours, wouldn't they?

I had two kids close together and my sanity began to sap in the middle and my exhaustion grew to epic proportions and all my good-intentions seemed to muddy in the waters of reality.

Around the time my son reached two and a half years,  out of desperation, I wrote this note to myself and jammed it to the fridge door. I read it over and over like an incantation, a meditation to find patience.

The note is still there, five years later, and yet already I know how much less I need it. The little voice that used to follow me around all day, telling me all of the things he found interesting, all of the adventure he adored, asking me question after question after question, has become quieter. Less frequent. More considered. He's a big boy, on the way to adulthood, and he needs me less now than he did then.

This week, my daughter started school. And a huge part of my heart broke. She's bright and sweet and kind and funny, and so ready for this stage of her life - the heartbreak was all for myself. 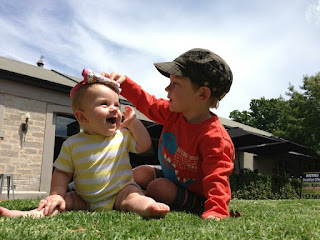 For seven years I have been wading through the days, exhausted, tired, and with the benefit of hindsight, so very happy and heart-full.

For a brief window of time, I had two constant little sidekicks, and I was so lucky and blessed to have had that experience.  On the morning I dropped my daughter at her first day of school, I went to my shopping centre to pick up essentials (and a much needed cup of coffee!). I found myself looking at the little people there, the way they were following their parents around, or were being pushed in prams, and my heart was heavy. In particular, I found myself watching one mum with three little children in a trolley. She looked so tired, so frustrated, so close-to-tears, and I so badly wanted to go up to her and say, "The days are long, and the years are short."

Obviously, I didn't. The years might, in fact, be short but my memory isn't. I sent her a sympathetic smile and kept going on my way. But really, it turns out, the platitude is true.

One of the things I did to 'keep calm and carry on' was take the kids to the park - the one nearest our house is great for kids of all ages. I could take a book and a cup of tea and sit on the bench while they played for HOURS. What's your favourite way to get through situations that are a little bit stressful? Do you read? Meditate? Watch movies? Listen to Metallica at full volume? Cook lasagne? I'd love to know, and I'm giving away a signed copy of HER WEDDING NIGHT SURRENDER, my upcoming Harlequin Presents/Mills & Boon Sexy title to a random commenter.

Pietro has strict rules for his marriage…
And he’s breaking every one of them!
Pietro Morelli is breaking his own rule—seducing his virgin bride! Heiress Emmeline is meant to be a wife of convenience, but the intense chemistry between them is more powerful than either can deny. But while Pietro hides a devastating secret, can they ever have more than a marriage in name only?