Today we have a smooch from Ally Blake but first ... the winner of last week's Sunday Smooch Giveaway is Laurie.

Can you please contact melaniemilburne@gmail.com to receive your prize!
And now for today's Sunday Smooch from Ally's The Dance Off. 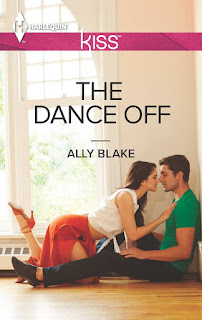 I'm so excited to bring you a smooch from The Dance Off, quite possibly my hottest book!
Brilliant architect Ryder Fitzgerald's little sister Sam is getting married. Without their father on the scene, Sam has asked Ryder to give her away.  The honour comes with a hitch - Same insists Ryder have dance lessons so as to be ready for the brother-sister dance.

Enter Nadia Kent - dance instructor, daughter of one of the world's most famous ballerinas and sexiest woman Ryder has ever met.
Ryder would rather eat his shoes than take lessons and Nadia would rather be dancing than teaching, so the tension is high. Add an attraction neither wants but both can't resist, and a summer storm brewing outside the studio, the dance lessons get hot and sweaty for more reason than one.
. . . . . . . .
Nadia eased herself into Ryder’s frame, adjusting only slightly, using her body to urge him where he needed to go. And this time, as one, their feet began to move. Slowly, gently, no push or pull, just the music pulsing through the floorboards and rocking them to and fro. Nadia nodded. Good boy.  The music swelled around them, all harp chords and piano keys, and the singer’s husky voice crooning about spinning round and round, moving so fast. Nadia moved Ryder forward, and then he moved her backward, the rhythm so natural she let him. He slid his hand an inch further around her back until her belly met his, and she let him do that too. He tucked their arms nearer their sides, which wasn’t classic dance hold, but even while it made Nadia’s breath swell she didn’t put a stop to it. The rhythm had other ideas as the dance swirled around and through them, binding them together and shutting out the world.
It was bound to happen, considering the way their bodies had fitted together in that kiss. That mind-blowing kiss—
Lightning lit up the room, followed by a crack of thunder, and then out went the lights. Then the fans. Music too. Not for the first time that week, but it was the first time they didn’t flicker straight back on.
The heavy silence, the oppressive stillness in the air, the shards of moonlight the only thing between them, it should have been the perfect chance for Nadia to cut her losses and call the lesson over. Except neither of them stopped swaying.
In fact, Nadia might even have leant her head against Ryder’s chest. Curled her fingers into the loops of his top. Melted a little when his chin landed gently atop her head. Melted a whole lot when his hands slid around her waist, across her tailbone, his thumbs dipping into the elastic of her skirt.
It was madness. Completely the opposite of what she’d set out to do with her hour. And not an altogether appropriate way to earn a fee.
But boy did she miss this. Not just the dancing, but the human connection. Skin on skin. Heat on heat. Feeling a part of something. Feeling discovered. Feeling wanted. And with every sway the sweetest sensation poured through her; a fragile serenity, not only filling nooks and crannies but opening them wide, till all that feeling pressed to the outer edges of her everything. And her heart became a bruising beat against her ribs.
Then, before she could talk herself out of it, she lifted onto her toes, wrapped her arms about Ryder’s neck. And then easy as you please her mouth met his. Hot, wet, open, lush.
His tongue met hers, and she turned to liquid, melting against him as if she wanted to vanish right on inside. And with a groan he lifted a hand to the back of her head, the other gripping her backside, leaving her in no doubt just how much he wanted this. And the warmth inside soon spun into a crazy heat.
She tugged his top over his head, all but growling at the sight of him. Rippling, hot, golden, even in shadow. No wonder she’d been so bent out of shape all week. How could she function on a normal level, when there was this to be had?
Her nails scraped through those tight curls of hair covering his chest and he sucked in a breath between his teeth, and grabbed her by the wrists.
She shot him a look through the darkness. Really?
And with a flicker of the muscle in his cheek, he eased his grip. Shuddering deliciously as she continued her exploration. All that heat. All that strength. She kissed her way across his chest, the salty taste of him turning her thoughts into a faint grey haze.
She felt him bunch beneath her touch before the groan tore from his mouth. And then his hands were on her shoulders, clever thumbs pulling her shirt away giving his mouth better access to her neck, his tongue tracing her collarbone, his teeth nipping the swell of her breasts. And when her collar slipped another inch and his mouth found her nipple, at the curl of his hot tongue she began to tremble.
Nadia dragged her fingers through his hair and held on tight as Ryder proved himself greedy, taking her mouth, taking everything he wanted, leaving her weak, loose, nothing but impulse, and sensation. With no thoughts to cling to except a dull buzz inside her head.
It buzzed again, and through the haze Nadia realised it was the trill of a phone chirruping through the heavy air.
When Ryder pulled away Nadia went with him, following his lips with hers. Not done yet. Not even close.
- - - -
Want to know what happens next?
Grab The Dance Off here!